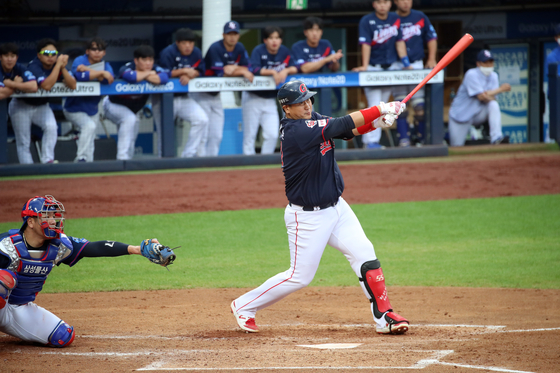 Lee Dae-ho of the Lotte Giants, right, hits a grand slam during a game against the Samsung Lions at Samsung Lions Park in Daegu on Aug. 23. [YONHAP]


Lee Dae-ho of the Lotte Giants isn't finished yet.

Born on June 21,1982, the 38-year-old veteran slugger is playing the last year of a four-year contract this season. Considering his age and long career, it wouldn't come as a surprise if Lee decided to retire at the end of the season.

But the stats tell a different story — with his power and experience still making him a formidable presence at the plate, Lee could very well sign another free agent contract at the end of the year.

During the Giants’ game against the Samsung Lions on Aug. 24 at Daegu Samsung Lions Park in Daegu, Lee smashed pitcher Jang Ji-hoon’s 142-kilometers-per-hour (88-miles-per-hour) fastball over the right fence, hitting a grand slam to extend the Giants lead to 5-0 and prove decisively that there's still plenty of life in his swing.

Although Lee has hit 325 career home runs as of Tuesday, it's been 3,389 days since he last got a grand slam.

The last time Lee hit a grand slam was back on May 14, 2011, during the Giants’ game against the Kia Tigers. He's managed seven in his career to date including the massive homer last week.

Following the grand slam, Lee continued his hot streak at bat as he added another solo home run, this time over the left fence, later in the game. This isn't an uncommon occurrence for Lee — it's been less than two months since Lee last hit two homers in a game, back on June 30 against the NC Dinos.

Lee's performance on Aug. 24 wasn't a fluke — one day earlier on Aug. 23 he picked up four hits in five at-bats, his best game of the season for hits.

Looking at Lee and the Giants’ performance, the club seems to be heavily affected by Lee’s performance, probably more than any other club.

It shows from last year’s record. In the 2019 season, Lee finished with a 0.285 batting average with 16 home runs. This was his worst season for home runs since 2004, and the entire team was dragged down with him.


Although Lee made his KBO debut in 2001, the first three seasons didn’t really count as he didn’t fulfill the number of regulated innings to be considered on the KBO’s individual rankings, so 2019 was the worst season essentially since Lee's stats began to count.

In addition to home runs, Lee also finished the season with 88 RBIs. This ended a five-season run with 100 RBIs or more.

He was given a lot of criticism for his poor performance, as he is the highest paid player in the KBO. Unsurprisingly, with their most important player struggling, the Giants finished at the very bottom of the league.

Following that disappointing 2019 season, Lee started his offseason training earlier than other years in Saipan. By the time Lee attended the Giants’ start-of-the year meeting, he was sporting a healthy tan and seemed to have lost a lot of weight compared to the previous years.

“Last year’s struggle was my responsibility,” Lee said. “So I prepared a lot.”

Lee got off to a strong start in this year's delayed season as he started off the month of May with a 0.349 batting average. Although he only hit one home run throughout May, he started to find his pace by hitting eight home runs in June. Then, in July, Lee once again struggled with a 0.293 batting average, 14 RBIs and two home runs, but he is slowly getting back on pace again.

Not only is Lee on a quest to redeem his reputation as one of the KBO’s very best clean-up hitters, but this season will also determine his future in the KBO. Lee will once again earn his free agent status this year.

So far, as of Wednesday 6 p.m., Lee has a 0.296 batting average with 13 home runs and 65 RBIs throughout 86 games. Lee has played in all 86 of the Giants’ games either as first baseman or designated hitter.

As one of the KBO's older players, many of Lee's contemporaries have already retired or are slowly fading into obscurity. Only a few of his classmates like Hanwha Eagles’ Kim Tae-kyun, LG Twins’ Jeong Keun-woo and Samsung Lions’ Oh Seung-hwan are still going strong.

At 38 years old, it’s not easy to maintain the same slugging average as Lee used to have back when he was at the peak of his career. But when he’s at bat, he is still considered a threatening cleanup hitter.

Lee has appeared as cleanup hitter more than other player in the KBO this season, assigned to the fourth spot in 83 out of 86 games.

“I have to compete against the young players,” Lee said ahead of the start of the season. “I’m still confident. Since I need [good] statistics to be able to play baseball, I’ll try my best to play well.”

So far, he has been living up to those words, thanks to his flexibility and thorough conditioning. He is frequently assigned as a designated hitter, but since he returned to the KBO in 2017, Lee has played in 97.8 percent of the Giants’ games.

After last year's failure, the Giants seem to have made improvements this season under new manager Her Mun-hoe. They still are ranked in the second half of the standing but looking at their performance this month, the Giants have a 0.611 winning percentage with 11 wins, six losses and one draw.

“My personal statistics are important, but I want to focus more on helping the team moving up [the standing],” Lee said. “As the oldest member on the team, I need to make our players stick together more. I am aware that our fans were hugely disappointed last season. But this season, we’ll work harder so the fans can enjoy watching our games.”