National Assembly shut down after reporter tests positive for virus

National Assembly shut down after reporter tests positive for virus 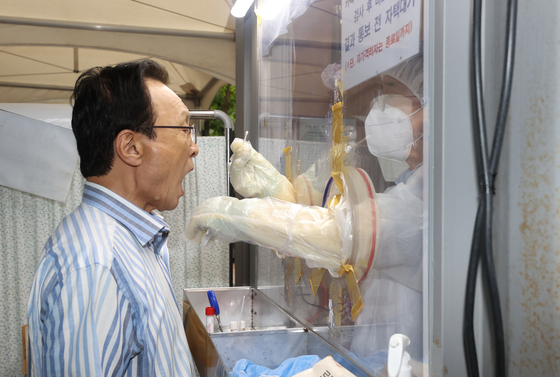 Chairman Lee Hae-chan of the ruling Democratic Party (DP) takes a coronavirus test at the Yeongdeungpo Health Office on Thursday. The National Assembly was shut down Thursday after a photojournalist who covered the ruling party's leadership meeting on Wednesday tested positive. [YONHAP]


The National Assembly was shut down Thursday after a photojournalist who had covered the ruling party on the previous day tested positive for the coronavirus.

All standing committee meetings scheduled for the day were canceled, and the ruling Democratic Party (DP) and opposition parties also canceled their meetings.

According to the DP and the National Assembly, the photojournalist was confirmed as being infected on Wednesday night. Earlier that morning, he had covered the DP's Supreme Council meeting, which was attended by leaders of the ruling party.

About 30 people were in the conference room located in the National Assembly. Among them were Chairman Lee Hae-chan, floor leader Kim Tae-nyeon, chief policymaker Cho Jeong-sik and Secretary-General Yun Ho-jung. Nam In-soon, Park Kwang-on and Lee Hyung-seok, members of the Supreme Council, also attended the meeting.

Six journalists were in the conference room as well, the DP said.

The DP members started their self-quarantine on Wednesday after they learned that the photojournalist took the coronavirus test. After being notified of the test results, the DP canceled all party meetings.

The party informed its officials on Wednesday at 8 a.m. that the Korea Centers for Disease Control and Prevention (KCDC) will decide Thursday morning who should undergo tests. It instructed them not to go to hospitals on their own to take a test, and asked them to continue self-isolation.

Investigators from the KCDC started contact tracing at the National Assembly on Thursday, including analysis of CCTV records. Those identified as having had close contact with the photojournalist are required to undergo a mandatory two-week self-quarantine, even if their coronavirus test is negative.

A DP official said that protective barriers were placed at the conference room table, so the odds of further infections are low.

Later in the afternoon, the DP said the KCDC has classified other reporters who covered the Supreme Council meeting as having had close contact, due to their proximity to the infected photojournalist. They will have to undergo a two-week mandatory self-isolation and take another test at the end of the quarantine period.

Although DP leaders were not classified as such, the National Assembly told them to take tests as soon as possible and respect self-quarantine measures, as the party's top politicians were scheduled to have frequent contact with other people.

The DP said Chairman Lee and floor leader Kim took coronavirus tests Thursday afternoon. Even if they test negative, they will be tested again on Sunday, the DP said.

The National Assembly also asked them to observe a two-week self-quarantine period and monitor their health conditions.

After the Supreme Council meeting on Wednesday, Rep. Kim, floor leader of the DP, had a meeting with National Assembly Speaker Park Byeong-seug and his opposition counterpart, floor leader Joo Ho-young of the United Future Party (UFP). The National Assembly and the UFP started contact tracing to prevent a possible chain of infection.

Park and lawmakers who attended the meeting all wore face masks when they talked. Since they did not have close, direct contact with the infected person, they have not been placed under mandatory self-quarantine.

The UFP said it has canceled party meetings scheduled for Thursday. Other opposition parties also canceled their meetings.

Ten standing committees of the National Assembly were scheduled to have meetings on Thursday, but they were all postponed to next week.

It remains to be seen if Chairman Lee will be able to attend the session or not, as he was advised to maintain a two-week isolation.