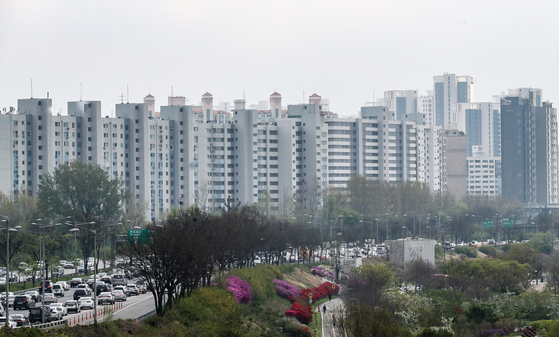 A view of Banpo-dong in Seocho District, southern Seoul. [YONHAP]


While real estate prices in the greater Seoul areas seem to be stabilizing, prices of cheaper apartments are rising.

With three controversial real estate bills railroaded through the legislature by the ruling Democratic Party (DP) last month, as well as concerns over the spread of the coronavirus, the number of apartment transactions in Seoul decreased last week, and prices were flat.

According to the Korea Appraisal Board, Seoul apartment prices rose by 0.01 percent between Aug. 17 to 24, compared to a 0.02 percent rise the week before.

But smaller and cheaper apartments have seen greater price gains.

In other words, a person with 313 million won could have purchased a property in the bottom 20 percent two years ago, but would need an additional 118 million won to get the same one today.

Under Korea’s unique jeonse system, a person puts down a large lump-sum deposit in order to live in a property for a number of years. The deposit is refunded without interest at the end of the contract.

According to the Korea Appraisal Board, jeonse prices for Seoul apartments in the fourth week of the month increased 0.11 percent compared to the previous week.

The increase was led by apartments in Gangnam District, Songpa District and Seongbuk District, all of which jumped by 0.16 percent, followed by flats in Seocho District and Mapo District, which rose 0.15 percent.

A shortage of jeonse apartments in Seoul is becoming a serious problem. With the ruling party’s bills designed to protect tenants last month, many landlords are now opting to charge monthly rent rather than jeonse.

Prices of apartments in buildings with fewer than four stories in Seoul are also soaring.