Kakao Games, an affiliate of IT giant Kakao, said Monday in a regulatory filing, that its shares were oversubscribed by 1,479 times from institutional investors during its two-day book building held last week, the highest-ever competition rate for an IPO in Korea.

The rate is far above the record held by the SK Biopharmaceuticals IPO earlier this year, which was 836 times oversubscribed.

Kakao Games will offer a total of 16 million shares through its upcoming Kosdaq debut, of which 70.49 percent are allocated to institutional investors.

A total of 1,745 institutional investors participated in the book-building process, according to the company's regulatory filing, of which 407 were foreign investors.

Institutional investors applied for a total of 16.6 billion shares, all of them submitted at 24,000 won ($20) per share — the highest level on the indicative price range — or above.

“I am pleased to see a meaningful achievement in which the company’s competitiveness and future value have been recognized by investors from home and abroad,” said Namkoong Whon, CEO of the company, in a statement.

The newly raised fund will be used to fortify the company’s development capacity, secure new games and expand into the global market, the company said.

Market watchers estimate the game company’s Kosdaq market debut will be successful not only because of the company’s promising business plan but also due to favorable market conditions to invest in IT-related stocks. 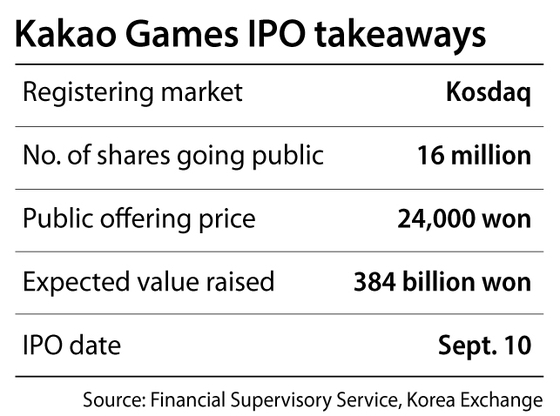 According to the Korea Financial Investment Association, deposits put to brokerage houses' accounts for investment purposes surpassed 60 trillion won as of Aug. 27 for the first time, a some 20 percent increase from 51 trillion won earlier this year.

“Retail investors have seen that a successful IPO could lead to high profitability from SK Biopharmaceuticals’ registration on the main bourse a few months ago,” said Choi Jong-kyung, a researcher at Heungkuk Securities. “It will be a similar situation this time with Kakao Games.”

The recent resurgence of Covid-19 also factors into the game company’s promising business.

“Coronavirus has acted as an opportunity to re-evaluate game companies with people spending more time at home and playing computer or mobile games,” said Kim Dong-hee, an analyst from Meritz Securities.

According to the brokerage house, shares of Nexon rose by 69.2 percent compared to earlier this year followed by Netmarble with 67.2 percent and NC Soft with 52.7 percent.

“It is likely to become a prime time for game companies, including Kakao Games, to secure funds for their businesses.”

Korea Investment & Securities and Samsung Securities are the leading underwriters of the deal.

Kakao Games will debut on the secondary market on Sept. 10.