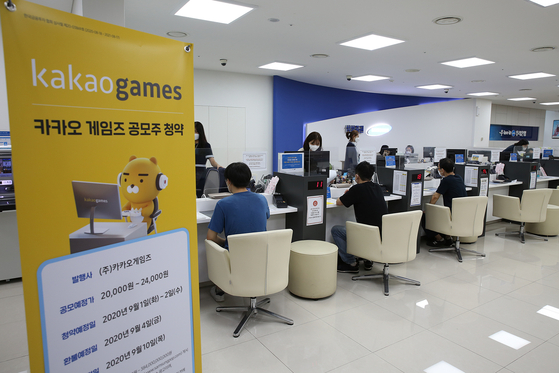 It is a new record for Korea.

Demand from retail investors was so high that the home trading systems for two of the underwriters — Samsung Securities and Korea Investment & Securities — crashed.

The three underwriters for the shares took in a total of 58.6 trillion won ($49.4 billion) in the two days of retail book building, breaking the 31 trillion won taken in during the book building for SK Pharmaceuticals in July.

Korea Investment & Securities, which was allotted 55 percent of the retail shares, said a total of 32.6 trillion won has been put on deposit for a subscription rate of 1,546.5 to 1.

Based on the finalized subscription rate, retail investors will receive one share of Kakao Games for every 18.2 million won on deposit. This means that 100 million won of deposit will yield only six shares.

In the case of SK Biopharmaceuticals, 12 to 13 shares were distributed to subscribers that deposited the same amount.

Of the 16 million shares going public, 20 percent have been allotted to retail investors.

Over-subscription is not an indicator of the prospects of a company or the long-term performance of shares. It is often the result of a mis-pricing of the initial offer.

Analysts say that the 24,000-won-a-share price is probably too low given the fact that the company trades in the over-the-counter market at 63,500 won a share, according to Shinhan Investment.

Demand is also high because of the recent boom in the IPO market. Low interest rates have driven punters toward stocks, which has helped drive a v-shaped recovery in the indexes.

"IPO stocks are becoming a popular investment all over the world, as many consider them to guarantee profit. In Korea, the majority of stocks that went public after May showed high returns on the first day in the market," said Kang Song-cheol, an analyst at Shinhan Investment.

Out of 19 companies newly listed after May 22, 16 went up after trading started. Some rose by the 160 percent first-day limit.

Analysts say that the successful debut of SK Biopharmaceuticals in July has helped boost confidence.

"Investors saw from the SK Biopharmaceuticals public offering that when a company with growth potential goes public, its stock price rapidly increases,” said Hwang Sei-woon, a researcher at the Korea Capital Market Institute.

Some analysts say that investors believe that the offering price is too low for a company with such high growth potential.

While questions remain about the ability of Kakao Games to develop its own releases, since it is oriented toward distribution, investors gave high marks in regards to the brand value of its parent company, Kakao, and the company’s competitiveness in the mobile platform games market.

Kakao Games achieved hits with its latest role-playing video game, Guardian Tales, which was one of the top five downloaded mobile game on Google Play. Ten more of its games are set to hit the market in the second half.

Employees and financial institutions have expressed concern about the mania surrounding IPOs.

“Many subscribers have newly opened stock accounts because of Kakao Games. I am aware some have even taken out loans. I am not sure if they are aware of the risks that come with stock investments,” said one teller at a bank.

Other big-name companies are preparing for IPOs.

Big Hit Entertainment, the agency behind the K-Pop sensation BTS, is set to list in the fall.