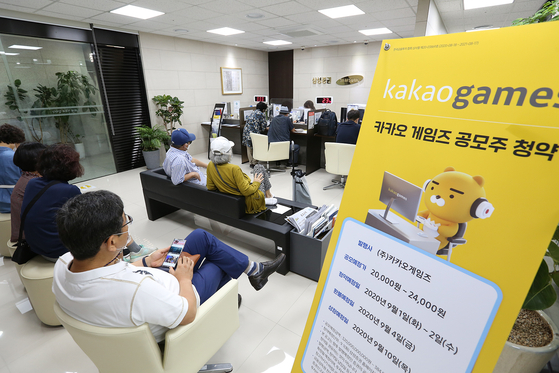 Visitors wait on Tuesday at the Mapo branch of Samsung Securities in western Seoul to place orders for shares in the public offering of Kakao Games. [SAMSUNG SECURITIES]


Kakao Games attracted 16.4 trillion won ($13.8 billion) worth of deposits on the first day of retail investor book building Tuesday, for an over-subscription rate of 427.5 times.

That means that an investor would have to put at least 5.1 million won on deposit to get a single share of the soon-to-be public company, which is being sold at 24,000 won a share.

Considering retail demand tends to increase on the second day of book building, the current calculation of 5 million won is likely to increase.

Of the 16 million shares going public on the Kosdaq market on Sept. 10, 3.2 million have been allotted to retail investors.

Korea Investment & Securities, one of three brokerage houses handling the shares, said Tuesday a total of 7.7 trillion won has been put on deposit for a subscription rate of 1 to 365.9.

Samsung Securities, which is handling 1.28 million shares, received 7.5 trillion won of deposits on Tuesday, for an over-subscription rate of 491.2 times. The brokerage house's online trading system was overloaded and shut temporarily due to the rush.

Kakao Games, which is 58.9 percent owned by Kakao, is likely to receive record-breaking deposits in its initial public offering. The record is currently held by SK Biopharmaceuticals, which went public in June with deposits of 30.9 trillion won.

The value of the company’s shares rose by the 160 percent daily limit for newly listed companies on its first trading day.

Kakao Games has already set a record for the subscription rate for institutional investors, being oversubscribed by 1,479 times.