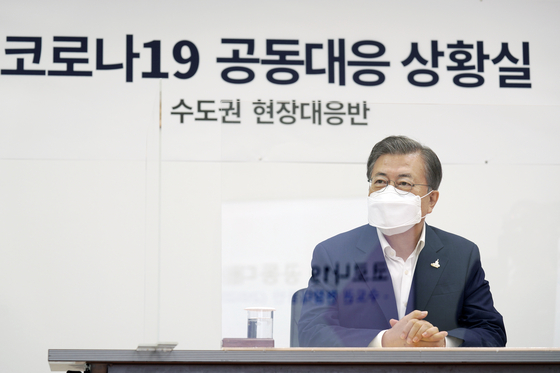 President Moon Jae-in listens to a briefing from officials of the National Medical Center at the hospital on Friday on the provision of sickbeds for serious cases of new coronavirus infection in the Seoul metropolitan area. [YONHAP]


President Moon Jae-in’s approval rating has risen to 49 percent, overtaking his disapproval rating for the first time in seven weeks, according to poll results released Monday.

According to Realmeter’s survey released Monday, Moon’s approval rating for the fourth week of August was 49 percent, up by 2.9 percentage points from the previous week. The poll was conducted from Aug. 24 to 28.


A Realmeter analyst told the JoongAng Ilbo that the latest resurgence of coronavirus infections has encouraged people to back the government, which is expected to respond with policies to stymie the spread of the virus and blunt the economic fallout.

According to Realmeter, Moon’s approval rating jumped in Daegu and North Gyeongsang, which were hit hardest by the outbreak in February and March.

In those regions, the president's popularity increased to 37.4 percent by 8.9 percentage points.

The approval rating also jumped among those over 60 years old, whose vulnerability to the virus makes them more sensitive to the growing outbreak.

Among those in their 30s, Moon’s approval rating actually fell by 3.1 percentage points, reaching 48.4 percent.

The ruling Democratic Party (DP) also enjoyed an increase in its approval rating, which rose to 40.4 percent, up 0.7 percentage points from the previous week.

The main opposition United Future Party (UFP) suffered a big drop. Its approval rating sank to 30.1 percent, a decrease of 5 percentage points. It's the largest single-week decrease since the UFP rebranded in February.

The poll had a 95 percent confidence level and a margin of error of plus or minus 2 percentage points.

More information about the poll is available on the websites of Realmeter and the National Election Survey Deliberation Commission.