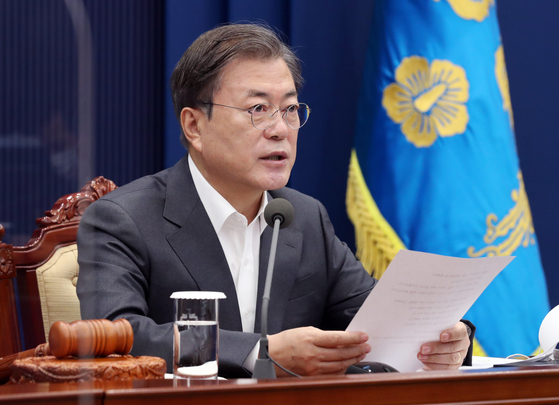 In this file photo, President Moon Jae-in hosts the weekly cabinet meeting through a videoconference from the Blue House on Tuesday. [YONHAP]


For the second time in two weeks, President Moon Jae-in’s approval rating has sunk to a new low, according to an opinion poll released Monday.

The poll showed that Moon’s support was especially down in his traditional strongholds of Gwangju and Jeolla. Respondents' approval of Moon fell by 14.2 percent in the region. In Daejeon, Sejong and Chungcheong, the president's approval rating went down by 13.7 percent.

The poll numbers appeared to be linked to public fatigue toward the monthslong feud between the administration and Prosecutor General Yoon Seok-youl, as well as the government’s unpopular real estate policies.

According to Realmeter’s analysis, Moon’s approval rating dropped to 36.7 percent on Dec. 1, when Yoon won a court injunction and returned to his office after a week of suspension. On the same day, Land Minister Kim Hyun-mee prompted a public uproar by comparing building apartments to making bread.

Moon's daily approval rating subsequently rose, reaching 39.6 percent on Dec. 3, but the next day when Moon announced his cabinet reshuffle, his rating again fell. Moon replaced four ministers, including his embattled land minister. Since the cabinet shake-up was announced on Friday afternoon, it seemed to have little impact on the survey results.

The telephone survey had a confidence level of 95 percent and the margin of error is plus or minus two percentage points.

In a separate poll by Realmeter, conducted Friday, four out of 10 voters said Justice Minister Choo Mi-ae should step down in order to end the war between the administration and Prosecutor General Yoon.

Among supporters of the DP, 64 percent said Yoon must resign, while 83.3 percent of PPP supporters said Choo must step down.

Among those who did not indicate a preference for either party, a majority said Choo must step down.

In Daejeon, Sejong and Chungcheong, 63.3 percent of respondents said Choo must step down. Yoon’s family is from Gongju, South Chungcheong.

The second poll has a 95-percent confidence level and the margin of error is plus or minus 4.4 percentage points. Additional information on the two polls is available on the websites of Realmeter and the National Election Survey Deliberation Commission.