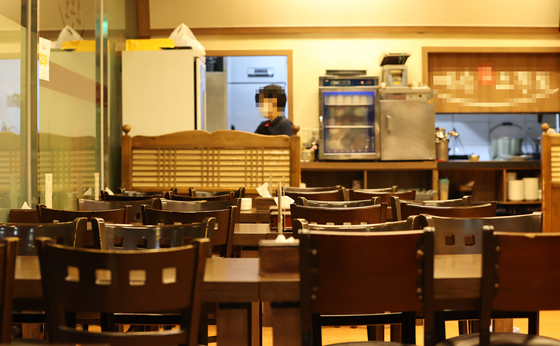 An empty restaurant in Jongno District, central Seoul, on Tuesday. The number of customers at restaurants has declined following the implementation of stricter regulations on the food service industry that started taking effect Sunday. [YONHAP]


The Korea Foodservice Industry Association urged the government to implement measures to revive the industry, saying its very survival is at stake.


Sales at restaurants, coffee houses and bars are down by at least 60 percent since Covid-19 cases began to rise again in the greater Seoul area in recent weeks. The association compiled those numbers using reports from food service companies.

Stricter rules on the operations of restaurants, cafes and bars went into effect Sunday in an effort to slow the spread of the disease. These rules will be in place through Sept. 6.

Under the new guidelines, from 9 p.m. through 5 a.m. the next day, restaurants will only be allowed to provide delivery or takeout services. Coffee chains are restricted to providing service off-premises throughout the day.

The situation for small businesses is near crisis, with reports of staff reductions, difficulty in paying rent and near failure for some, the association said in a statement. It added that the new rules in the greater Seoul area have led to a decline in sales of more than 60 percent.

It urged the government to pass strict measures against those who have caused the disease to return, prevent the spread of the virus and implement special measures to help people from the food service industry, including tax reductions, financial support to hire workers and rent support.

Sales in the food service industry recovered in May and June as the government delivered support payments to all Koreans, the association wrote, adding that consumption started to decline in July.

According to Korea Credit Data, which develops and sells small-business software, sales at restaurants, coffee houses and bars in the third week of June declined 9 percent from the same period last year. But in the third week of August, sales dipped 22 percent on year. Compared to the previous week, sales were down 11 percent.