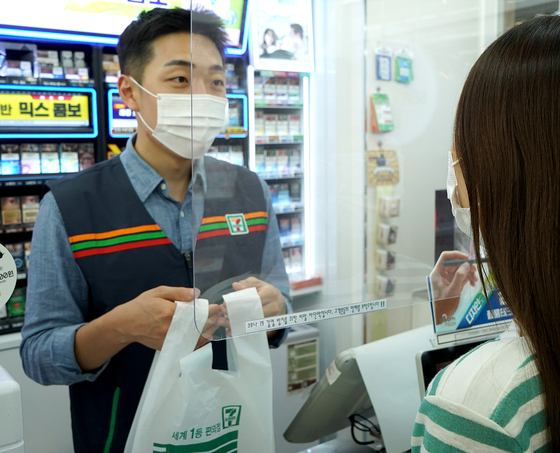 7-Eleven plans to install barriers at stores nationwide to limit the possibility of infection. [7-ELEVEN]


Retailers are curtailing their operations in line with new government restrictions effective Sunday.


According to the rules, restaurants, cafes and bakeries in Seoul, Incheon and Gyeonggi Province must stop serving customers in-person by 9 p.m. From 9 p.m. through 5 a.m. the next morning, only takeout and deliveries are allowed.

Franchise coffee shops are only permitted to sell takeout items or deliver to customers, and these restrictions are in effect all day.

In line with the restrictions, department stores and discount marts are cutting their hours and recording the names of people entering the stores.

Hyundai Department Store on Sunday announced it is reducing the hours of the food court, restaurants and cafes at 10 of its department stores and five of its outlets located in Seoul, Gyeonggi and Incheon.

The department store franchise is taking the names and contact details of people entering the stores and requiring all employees to wear masks. Tables at restaurants will be set two meters (6.56 feet) apart. Lessons given at the department store’s culture center, like yoga classes, are canceled from Monday.

7-Eleven is installing barriers between employees and customers to minimize the chance of infection. All locations nationwide will be retrofitted with the barriers from the second week of September.

Each store will receive 10 KF94 masks for employees.

Amid the recent rise in the number of virus cases due to clusters linked to a church and an Aug. 15 rally in Seoul, deliveries by convenience stores have been on the rise. From Aug. 17 through Aug. 28, the number of deliveries by CU jumped 76.4 percent compared to the same period last month.

The list of the most popular items has changed.

"Customers used to purchase online small amounts of goods needed urgently, but they have recently started to shop using the delivery service," said BGF Retail, an operator of CU, in a statement.

CU will double the types of products that can be delivered, including ice cream, because it projects demand for deliveries to rise further following the new social distancing regulations.

As virus cases spiked in recent weeks, some retailers had to shut offices and stores after employees were confirmed to have contracted the virus.

Homeplus shut its headquarters in Gangseo District, western Seoul, on Friday after an employee tested positive. Coupang and 7-Eleven shut their headquarters earlier this month for the same reason. Delivery workers of e-commerce operators Market Kurly, SSG.com and Coupang were also found to have tested positive in recent weeks.