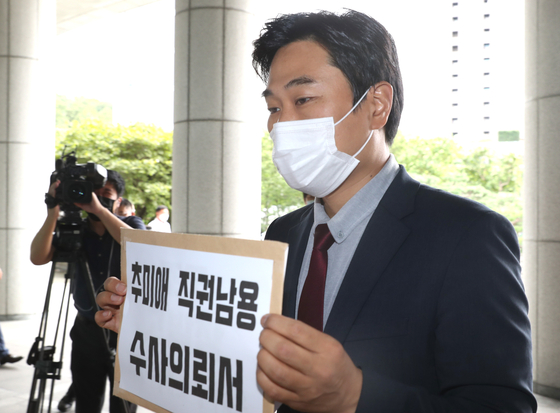 Lee Jong-bae, leader of the conservative group the Alliance for Rule of Law, enters the Supreme Prosecutors' Office in Seocho District, southern Seoul on Thursday to file a criminal complaint, demanding that prosecutors probe into Justice Minister Choo Mi-ae's abuse of power. [YONHAP]


A conservative activist group on Thursday filed a criminal complaint asking prosecutors to investigate whether Justice Minister Choo Mi-ae intervened to get special treatment for her son while he was serving his military duty in 2017.

The Beobseryeon, or the Alliance for Rule of Law, held a press conference and said it has submitted a complaint to the Supreme Prosecutors’ Office to investigate the complaint, particularly the allegation that Choo's son received an extraordinary extension of medical leaves.

In 2017, Choo’s son, surnamed Seo, was serving his military duty in the Korean Augmentation To the United States Army, or Katusa, for the 2nd Infantry Division of the U.S. 8th Army. Opposition lawmakers have raised suspicions that Seo was let off the hook when he went AWOL. Choo has consistently denied the allegation.

“Seo took 23 days off consecutively in June 2017, including medical leave,” said Lee Jong-bae, the head of the group. “During this process, an aide to Choo, who was chairwoman of the ruling Democratic Party (DP) at the time, reportedly called a member of Seo’s military unit and asked for an extension of his medical leave.”

Lee’s argument is based on allegations raised Wednesday by Rep. Shin Won-sik of the opposition People Power Party (PPP). Shin said his aide obtained statements from two military officers who were supervisors of Seo in 2017, confirming that Choo’s aide had requested an extension of Seo’s medical leave when he failed to return to the base in time.

“If Choo ordered her aide to call the military to make the request, that is an abuse of power,” Lee said. “Based on what we have learned so far, Choo’s son should have been reported AWOL. Considering the public anger, especially [among] the young soldiers serving their military duty right now, this is a far more serious issue than the [abuse of power and corruption] scandal of Cho Kuk.”

On Wednesday, the PPP also filed a similar criminal complaint with the Supreme Prosecutors’ Office to investigate Seo, Choo’s aide and other military officials. The opposition party complained that it already filed a complaint in January to investigate Choo’s alleged abuse of power, but the Seoul Eastern District Prosecutors’ Office seemed unwilling to go after the minister of justice.

Later Wednesday evening, lawyers representing Seo released a statement to refute the suspicion that he had received special treatment. Conspicuously absent from the statement, however, was any refutation of the PPP’s accusation that Choo’s aide had requested an extension of his leave.

The lawyers said Seo is a victim of his former fellow soldier’s lies that he had received special treatments. The former fellow soldier told the JoongAng Ilbo in February that Seo failed to return to his unit in time after a medical leave, but that a senior officer had suddenly granted an extension.

Seo’s lawyers said their client had submitted all the necessary medical papers to apply for medical leave. They said they want the prosecution to lay bare the truth as soon as possible.