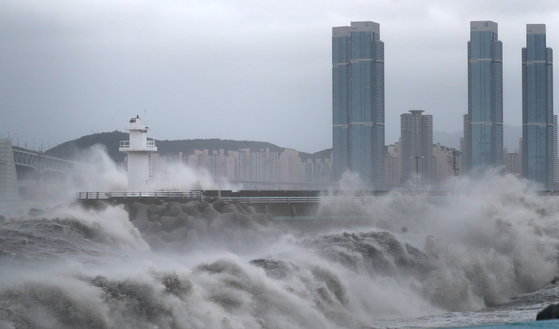 
Typhoon Haishen rampaged its way across Korea’s southeastern coast Monday, hammering Busan, Ulsan and coastal Gangwon with intense rains and winds as it made its way northwards.

Defying predictions a day earlier that the storm would narrowly skirt the peninsula, Haishen made landfall near the city of Ulsan Monday morning, packing powerful winds measuring up to 35 meters per second (78 miles per hour).

By 3 p.m., the storm exited eastern Gangwon around 20 kilometers (12 miles) north of Gangneung and was back in the East Sea, moving north and due for a second landing in North Korea’s North Hamgyong Province Tuesday morning.

With pressure at its center measuring around 965 hectopascals, the storm was moving at a speed of around 32 meters per second at noon on Monday, according to the Korea Meteorological Administration (KMA).

Like Typhoon Maysak before it, Haishen wreaked havoc in coastal cities of eastern Korea, causing damage to hundreds of properties due to heavy rains and winds.

No casualties were reported as of Monday afternoon, but a 44-year-old man went missing in Samcheok, Gangwon, that morning after returning from mining limestone at a rural location.

According to city authorities, the man slipped into a flooded drainage system and was swept away by waters. Emergency personnel were still searching for the man by press time on Monday.

Eastern Gangwon, where Samcheok is located, experienced around 30 to 60 millimeters (1.2 to 2.4 inches) of rain per hour, which in turn caused landslides throughout the mountainous region that blocked roads and flooded neighborhoods.

Up to 400 millimeters of rain were expected in the area through Monday and Tuesday, the KMA said, along with winds measuring at around 25 to 40 meters per second — strong enough to knock over an adult.

The KMA issued a storm surge warning in 10 locations along the coast of the East Sea in Gangwon Tuesday due to sea levels elevated by the typhoon. Yangyang and Goseong Counties, as well as the cities of Samcheok, Donghae, Gangneung and Sokcho, were vulnerable to surges through Monday evening, the agency warned.

Throughout the Gyeongsang region, a total of 17,620 households experienced varying degrees of blackouts as a result of the storm, and more than 6,000 had yet to regain power by Monday afternoon. 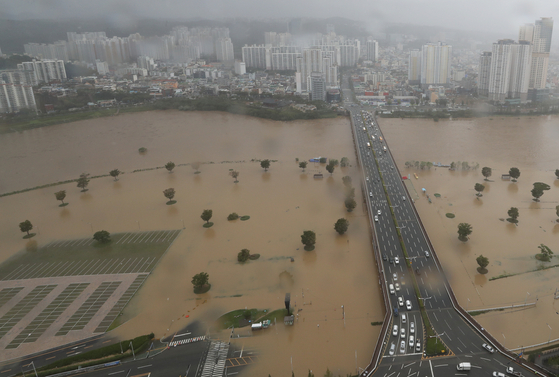 Flooding along the banks of the Taehwa River in Ulsan, due to rains brought by Typhoon Haishen on Monday. [YONHAP]

At least 1,640 people had to be evacuated from homes, while a total of 5,882 schools throughout the region suspended classes for the day, or carried them out online.

Train services throughout most of the southeast were suspended Monday morning but resumed in the afternoon. Likewise, all flights in and out of Jeju Island were canceled throughout the morning.

With the worst of the storm having passed by 4 p.m., the KMA lifted typhoon alerts in Busan, Ulsan, South Gyeongsang, and North and South Jeolla. By 5 p.m., storm alerts were lifted from North Gyeongsang, Daegu, and the Chungcheong region.

Greater Seoul, which experienced rains and winds of a lower intensity than the country’s southeast, had its typhoon alert lifted at 3 p.m. 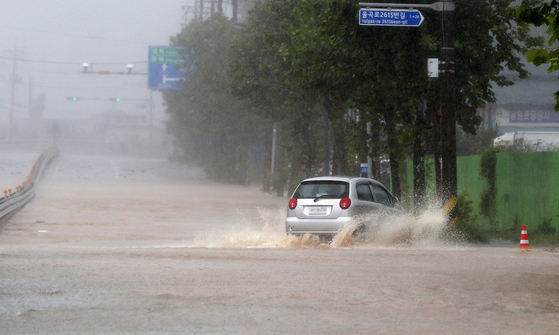 A car swerves on the road in Gangneung, Gangwon, on Monday. The area was hit by intense rains measuring up to 400 millimeters (15.7 inches) due to Typhoon Haishen. [YONHAP]


Haishen’s rampage throughout the peninsula was the latest in what is shaping out to be one of the most destructive series of natural disasters in recent memory in Korea.

After a record-long rainy season through early August that caused immeasurable damage, the country was affected by back-to-back typhoons in Bavi from Aug. 25 to 27 and Maysak from Sept. 1 to 3 before Haishen’s arrival on Sunday to Monday.

The season’s 11th typhoon — Noul — has yet to form, but already fears are rising that Korea may be hit by it.

Last autumn also broke records by becoming the first time Korea was hit by three typhoons consecutively throughout September and October — a feat that has repeated itself this year.

Meteorologists warned that relatively warm sea level temperatures and high-pressure areas in the atmosphere prevalent in the region meant that conditions were ripe for additional typhoons to form in the Pacific Ocean.