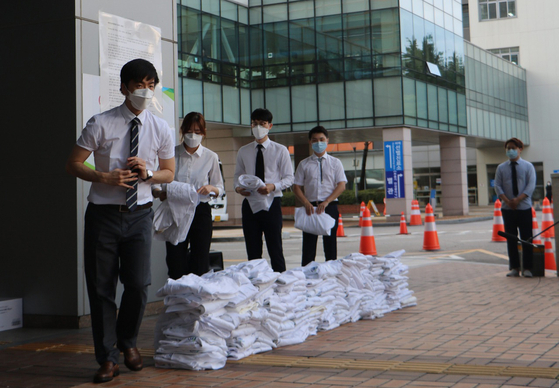 Residents at the Catholic University of Korea Seoul St. Mary's Hospital in Seocho District, southern Seoul, take off their gowns and stage a walkout Sunday as trainee doctors kicked off a strike Friday to protest the government’s plan to increase medical school admissions. [NEWS1]


Trainee doctors on all levels went on indefinite strike Sunday to protest the government's plan to increase medical school admissions, with concern mounting over a general doctors’ walkout this week.

The Korean Intern and Resident Association kicked off a strike Friday, paralyzing some hospital emergency rooms.

And there are worries over a three-day general strike by doctors set for Wednesday amid a recent spike in coronavirus cases.

The Korean Medical Association (KMA), which represents some 130,000 doctors, is scheduled to strike between Wednesday and Friday, with some medical professionals walking off the job starting Monday.

There is still hope of a last-minute deal to be reached with the KMA before Wednesday as the association Sunday proposed a meeting with the government and ruling and opposition parties.

While the situations vary depending on the hospital, some emergency room operations have been halted since Friday.

Some major hospitals, like Yonsei University’s Severance Hospital in Seodaemun District, central Seoul, notified its staff that its emergency room will not be able to take in critical patients for the time being. The hospital’s internal medicine resident interns all walked out, forcing it to shut down its emergency room and its intensive care unit.

Other general hospitals have scaled back outpatient services, pushed back non-critical surgeries and adjusted operation schedules.

Trainee doctors at major university hospitals were seen stripping off their gowns en masse Sunday in a sign of protest. In the case of Seoul National University Hospital in central Seoul, some 500 trainee doctors, or 80 percent of its total residents and interns, are participating in the walkout.

The government announced last month that it plans to raise medical school admissions by 4,000 students over the next decade from 2022 to 2031, in increments of 400 students annually. Three-quarters of these new doctors will be required to practice outside the Seoul metropolitan area in a move to improve medical services in rural regions. The other 1,000 doctors will be required to specialize in less popular fields such as epidemiology, trauma and biomedical research.

Admissions to medical schools have been capped at 3,058 students annually since 2006. The admissions quota will revert to this figure starting 2032.

The KMA has argued that there is not a shortage of doctors but that there was a fundamental problem in how they are being used.

In a public address Saturday, Health Minister Park Neung-hoo made a plea for doctors to consider their hospitals and said that the government plans to suspend its medical workforce reform plans until the Covid-19 pandemic is brought under control.

Park said, “We will put on hold pushing forward issues being protested by medical organizations such as increasing the medical school admissions quota and establishing a public medical school until after the Covid-19 situation in the metropolitan area is stabilized.”

He stressed the importance of doctors and the government working together amid a spike in coronavirus cases in the country.

But Park also warned, “Protecting the life and safety of the people is the top priority bequeathed upon the government, and we will take all necessary measures if medical professionals do not maintain the medical field.”

The Ministry of Health and Welfare said about a third of the country's trainee doctors participated in the strike as of Saturday, or 932 of a total of 2,996 trainee doctors registered at 244 medical institutes.

The Health Ministry initially was slated to notify the Education Ministry of more concrete plans to increase admissions for medical schools by the end of this month.

Health Minister Park and Choi Dae-zip, president of the KMA, held a meeting last Wednesday but were unable to iron out differences, leading to doctors announcing they planned to carry out a general strike as previously announced.

Initially, the KMA in a statement on Saturday relayed its continued mistrust of the Health Ministry and said it plans to follow through with its doctors’ collective action unless the government changes its stance.

It accused the government of trying to temporarily defer the admissions issue “to gain some breathing room and to push [the reform plan] again at an early date.”

The KMA added that trying to “coerce doctors through government authority is only throwing oil on the wrath of the medical community.”

However, on Sunday, the KMA took a step back and said that it reached out to the Prime Minister's Office, the ruling Democratic Party and the main opposition United Future Party and proposed emergency talks.

“We have proposed a meeting leaving all possibilities open as we face a crisis situation with Covid-19 spreading nationwide,” said Kim Dae-ha, a KMA spokesman. “We hope we can resolve the issue through dialogue in this grave situation.”

Trainee doctors went on an initial strike on Aug. 7 to protest the government’s reform plans. They also took park in a nationwide one-day general strike of doctors held the following week on Aug. 14.

There were no major disruptions reported during these strikes, with hospitals mobilizing alternative workers and doctors in departments not participating in the walkout. Likewise, medical professionals remained on regular duty for essential services such as intensive care units and emergency rooms.