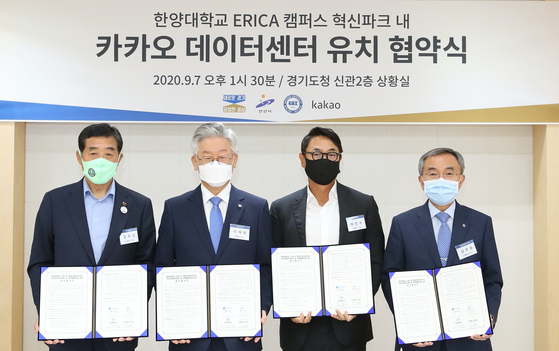 
IT firm Kakao will open its first data center in Ansan, Gyeonggi, in 2023.

The plan is to finalize the design of the center this year and start construction in 2021. Completion is aimed for 2023. Kakao’s data center will be “hyperscale,” holding 120,000 servers with a total data storage capacity of six exabytes, or 6 billion gigabytes, the company said.

This will be the first data center for Kakao, Korea’s second largest IT firm by market cap behind Naver. Data centers hold core infrastructure for such companies as the physical base for servers, network equipment and data storage.

Naver currently has a data center in Chuncheon, Gangwon. Kakao, on the other hand, had outsourced data storage facilities since it started in 2006 until recently, as its business expanded into realms like finance and games.

“For us, this data center will give us a stable foundation for our research and development in technology like big data and artificial intelligence,” said a Kakao spokesman. “With it, we can also strengthen our knowledge of data management.”

An affiliate specializing in IT solutions for corporate clients, Kakao Enterprise is preparing to launch a corporate cloud service, for which a Kakao-run data center would be important.

The Korean IT firm said it would include eco-friendly features in the data center, such as using systems to monitor water and electricity consumption and using collected rainwater. The latest innovations will be used to minimize damage in case of emergency blackouts.

On Monday, Kakao and Hanyang University executives and officials from the Gyeonggi and Ansan governments got together to sign an agreement for the project. Last year, the Ansan Science Valley, where Kakao’s data center will be built, was designated to become a “technological innovation cluster” by the government. The plan is to continue cooperation between the three parties to boost infrastructure on artificial intelligence, big data and cloud businesses.

“Our goal is to establish the best data center in the IT industry in terms of stability, efficiency and security. It will be the foundation to support the growth of relevant tech fields,” said Kakao CEO Yeo Min-soo.

Databricks to bring its 'data lakehouse' service to Korea