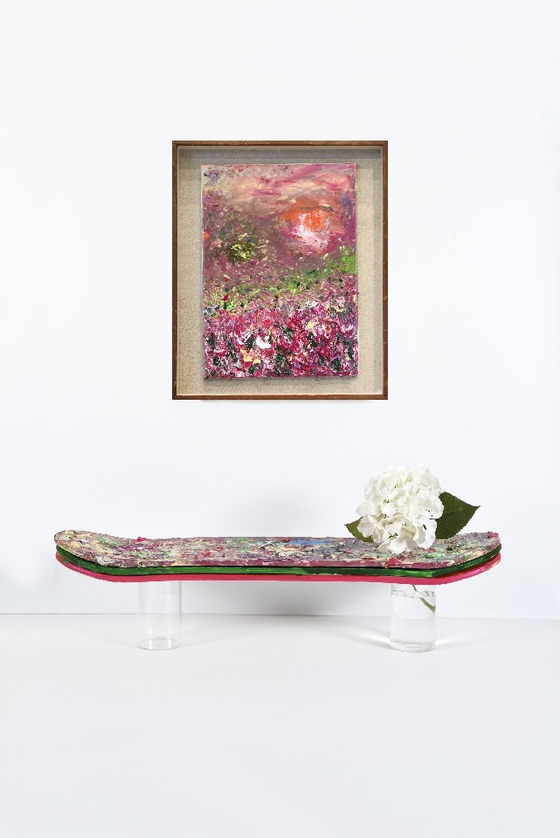 A mixed media painting and sculpture “Palette Garden” will be the first of her pieces to be auctioned after Kwon was selected as a resident artist at the Gana Art Residence earlier this year. The Gana Art Residence was built in 2006 inside Gana Art Park in Yangju, Gyeonggi, for local artists to move in to and participate in residency programs to produce artwork for local and global exhibitions.

“Palette Garden” will be held at a special exhibition that Seoul Auction organized for artists residing at Gana Art Residence, in which the artists used skateboards without wheels as their canvas.

In the painting "Palette Garden,” she used her unique finger painting technique to mix acrylic paints with her hands and paint with her own colors.

Kwon's "Palette Garden" can be viewed at the preview exhibition held from Sept. 7 to 11 in the lobby on the first floor of the Seoul Auction’s Gangnam Branch in Sinsa-dong, southern Seoul.

Kwon was selected as a resident artist at the Gana Art Residence earlier this year after being chosen as the only Korean artist to be invited to the global contemporary art festival, Nuit Blanche Paris, hosted by Paris in October last year.

As an entertainer, Kwon is also actively appearing on entertainment shows such as JTBC’s online production company Studio Lululala's "Into the Wild" and MBC Plus’s online producing company Tikitaka's "Song for the Small Things” (translated).