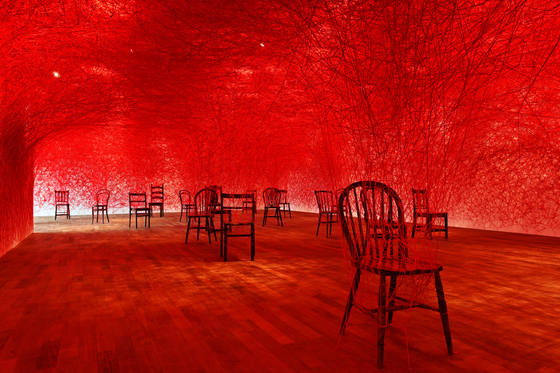 Japanese artist Chiharu Shiota’s installation ’Between Us“ is being displayed at Gana Art Center in Pyeongchang-dong, central Seoul. [GANA ART]


Just like other museums and galleries across the world, Gana Art Center in Pyeongchang-dong and Gana Art Nineone in Hannam-dong, both located in the heart of Seoul, were hit hard by the coronavirus pandemic.

The two galleries saw a major drop in the number of visitors, down to about 20 a day on average, in the weeks following the outbreak.

But the two art spots are seeing a surge of visitors after they began displaying pieces by Japanese artist Chiharu Shiota from July 18.

Between 150 and 170 visitors show up to see the 48-year-old artist’s solo exhibitions titled “Between Us.”

Along with the two galleries, Shiota’s other works are also on display at Paradise City Korea Hotel in Incheon as part of a group exhibition titled “Oh! My City.”

The so-called “Chiharu craze” was first started by local art collectors. Of all the 20 artworks that are displayed at Gana Art Nineone, most of them sold before the exhibition even opened while almost all the works out of 50 available at Gana Art Center sold out except for a few larger-than-life installations.

“As soon as the list of artwork [that were going to be displayed] was unveiled to some of our customers before the exhibition began, orders flooded in,” said Lee Jung-yong, the head of Gana Art Gallery. “I was surprised to see the reaction [from customers.] It was much more intense than I expected.” 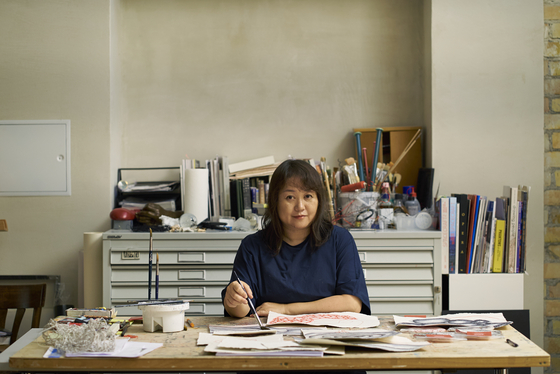 
Lee continued, “A lot of visitors already knew many things about Shiota through her previous shows. Her drawings, sculptures and little installations are not that highly priced compared to the artist’s reputation, and it attracted more collectors this time, I guess.”

Shiota is often dubbed the artist of yarn. She works on drawings and sculptures but her signature work is installations made with string, where she weaves string around metal frames to make small installations. She became famous with her room-sized installations that stretch across spacious exhibition venues. Her creations made with webs of yarn look sophisticated and fragile yet grand and eerie.

Shiota first grabbed the public’s attention when she was chosen as the artist for the Japan Pavilion of the 2015 Venice Biennale.

Last year, Shiota held large-scale solo exhibitions at Martin-Gropius-Bau in Berlin and Mori Art Museum in Tokyo. Her exhibition in Tokyo attracted as many as 660,000 visitors.

Her solo exhibition “The Soul Trembles” was held at the Busan Museum of Art from last December to April in the port city of Korea, but the show failed to attract many visitors due to the outbreak of coronavirus.

Shiota uses everyday necessities such as a window frame, chair, bed, suitcase and keys in her artwork to show that our lives are finite. Art critics say her works contain contemplation on relationships between people. Critics also say complex feelings of the artist from her childhood memories when she witnessed her neighbor’s house on fire, the fear she felt when she saw her grandmother’s tomb and the two times she underwent cancer treatment are all visible in Shiota’s creations.

“State of Being,” one of the installations on show at her Seoul exhibition, is a good example of showing her world of art. It is a small work, in which several metal keys are woven into a box with a metal frame. The artist got the inspiration for the shape of the keys from the ones that she used while studying in Berlin.

“State of Being” reminds us of the life of people who wander around. The keys must have been passed from one person to another and they are a reminder of those who stayed in and left the same space at different times.

Of all the pieces on display in Seoul, the most eye-catching is undoubtedly “Between Us.” It is installed across the second floor of the Gana Art Center that measures about 300 square meters (3,229 square feet) across. It was a grueling procedure to complete the installation, which requires intertwining red yarn with 30 old chairs. Including two staff members who flew all the way from Germany, eight people worked on the piece for eight hours every day for 12 days.

Kim Sun-hee, the former director of the Busan Museum of Art, who participated in Shiota’s Seoul exhibition as one of the planners, said, “Each chair stands for an individual, but when the chairs are put together, its meaning becomes more complex.”

Kim added, “Through this work, the artist talks about an individual who once occupied a place and then disappears. She also tells a story about people who live in relationships.” 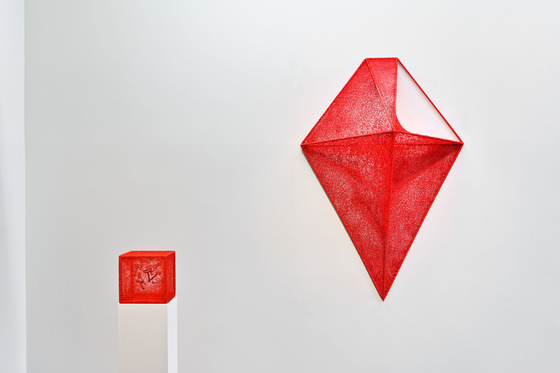 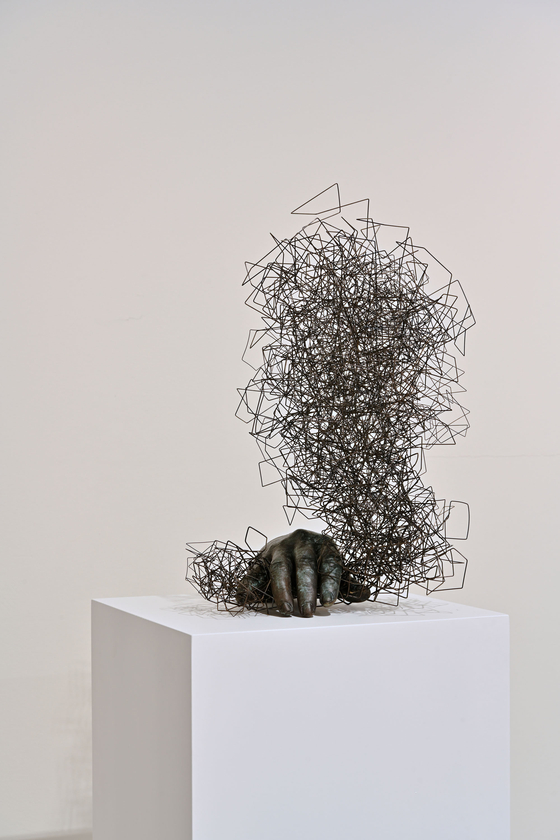 ’In the Hand“ by Shiota uses brass wires and bronze as main materials. [GANA ART] 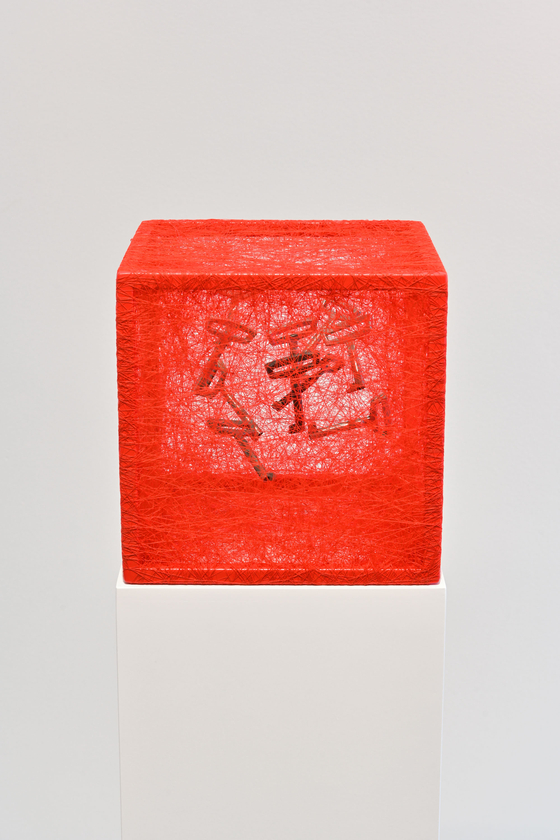 ’State of Being“ by Shiota uses yarn, metal keys and a metal frame. [GANA ART]


Shiota is synonymous with red string but this was something she never intended to happen at the beginning of her career.

Born in Osaka, she majored in painting at Kyoto Seika University. She left for Germany in 1996 to further study art. She had aspirations of becoming a painter, but a weird dream she had one night while staying in Germany changed everything.

“I was part of this two-dimensional drawing in my dream and I couldn’t breathe because I was covered with paint,” the artist was quoted as saying.

After having that dream, Shiota began using yarn and has been mostly working on installations instead of drawing on canvases.

During an interview with Designboom, an online architecture and design magazine, Shiota said, “As I began working with threads, I felt liberated because I felt like I was drawing on the universe. The lines I make with strings are strokes [like others make with] paintbrushes.”

Shiota used to linger on themes like existence and absence using familiar objects but her recent works evoke images of blood vessels, cells and skins because she began to use more red yarn in recent years. The color of the string conjures up the image of blood vessels of creatures. 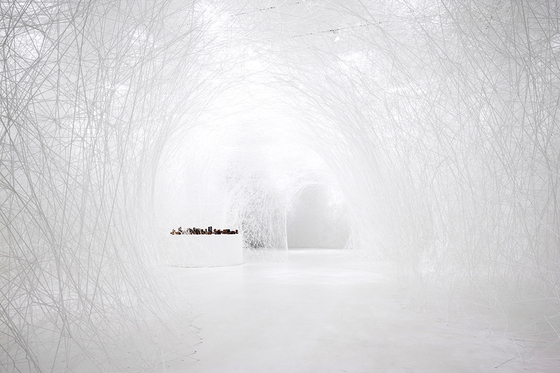 An installation of Shiota is put on display at Paradise City Korea Hotel in Incheon. [PARADISE ART SPACE]


Kim, the former director of the Busan Museum of Art, said, “Such works spotlight the artist’s agonies when she stood at a fork in the road between life and death. Every piece of her work contains introspection on life and death. Her works are like epics that are dedicated to our life and existence.”

The exhibition at Gana Art Nineone in Hannam-dong came to an end on Aug. 2, but the one in Gana Art Center in Pyeongchang-dong runs through Aug. 23. “Oh! My City,” a group exhibition, which has works of Shiota, runs through Oct. 4.