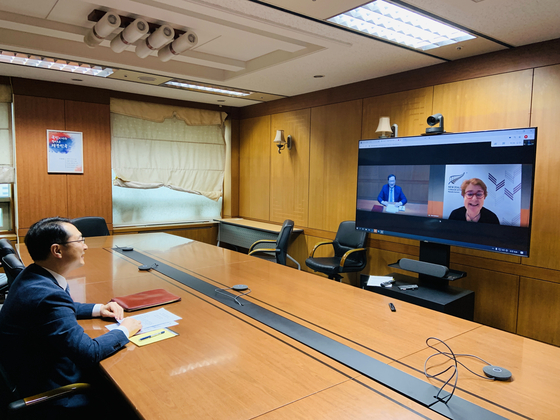 As in-person multilateral diplomacy has come to a halt amid the ongoing pandemic, Kang will take part in virtual talks involving the 10 members of the Association of Southeast Asian Nations and other key players in the region from Wednesday through Saturday. The talks include the Asean Regional Forum (ARF), the East Asia Summit (EAS) and the Asean plus three meeting, involving Korea, China and Japan.

“We are making efforts to send out the message that it is crucial to bring back North Korea to dialogue," a Seoul Foreign Ministry official told reporters Monday. "We are in talks to reaffirm international efforts toward denuclearization of the Korean Peninsula and making substantive progress for a permanent peace regime."

ARF is one of the rare regional security forums that North Korea regularly participates in, though it's unclear whether a Pyongyang diplomat will attend virtually this year.

Vietnam is the host of this year’s Asean-related meetings.

The Asean sessions are also expected to be a platform in which the United States and China play out their ongoing rivalry in trade and security matters during the EAS on Thursday and ARF on Friday.

U.S. Secretary of State Mike Pompeo is expected to take part in the Asean meetings and stress the importance of ensuring peace on the Korean Peninsula and security in the Indo-Pacific region.

“I look forward to seeing my Asean and Indo-Pacific counterparts next week at a host of virtual meetings," Pompeo said during a press conference last Wednesday, noting he will discuss issues including Covid-19, North Korea and the Hong Kong situation.

“I’ll also raise how the Trump administration is restoring reciprocity to the U.S.-China relationship.”

In turn, Chinese Vice Foreign Minister Luo Zhaohui said during a meeting last Friday that the United States is deliberately stirring up trouble in the South China Sea and stands in the way of peace and stability in regions. He called on the Asean countries to work together with China to safeguard regional peace and stability.

Luo made the remarks during a meeting with diplomats from Asean countries in Beijing, urging cooperation in East Asia, according to the Chinese Foreign Ministry.

He also noted that the United States, through its Indo-Pacific Strategy, introduced new policies related to the South China Sea, forcing Asean countries to choose sides between Washington and Beijing.

Washington has recently been urging its allies in the Asia-Pacific region, including Seoul, to partner with the United States against what it describes as political, military and economic aggression from China.

"So whether it's our friends in India, our friends in Australia, friends in Japan or South Korea, I think they have all come to see the risk to their own people, to their own countries, and you'll see them partner with the United States to push back” against China, Pompeo said in an interview with Fox News on Sept. 1.

During the U.S.-India Strategic Partnership Forum on Aug. 31, U.S. Deputy Secretary of State Stephen Biegun also indicated that the United States is looking to expand its Quadrilateral Security Dialogue, or Quad, involving its regional allies Australia, Japan and India, along with other countries that share similar values.

He went on to specifically name South Korea, Vietnam and New Zealand as countries with which the United States is working closely on its Covid-19 response, in addition to the Quad countries.

Biegun said the seven countries, who are holding weekly meetings, are “very cooperative partners” and “a natural grouping of countries that really will do their very best to advance this combination of interests that we have in the Indo-Pacific.”

The U.S. special representative for North Korea elaborated that “while interests will drive all our nations to make choices in the policy sphere in the Indo-Pacific and beyond, shared values that complement shared interests create a solid foundation.”

He added that the “Quad isn’t exclusive” and “there’s plenty of reason to bring other countries into this discussion as well.”

Choi's meeting with Japanese Ambassador to Seoul Koji Tomita came amid a looming leadership change in Tokyo, as Japanese Prime Minister Shinzo Abe announced he will step down because of health problems last month.