Washington expects Seoul to be “flexible” in defense cost-sharing negotiations, said Marc Knapper, the U.S. deputy assistant secretary of state for Korea and Japan, Tuesday, while noting that the ongoing coronavirus pandemic is putting a “crimp” on face-to-face talks.

"Our leaders have spoken recently, and we'll continue to look for ways to sit down and talk," said Knapper during an online seminar hosted by the Washington-based Center for Strategic and International Studies (CSIS) think tank, discussing the delays in the renewal of the bilateral Special Measures Agreement (SMA).

"Suffice to say that, I think we believe our side has been very flexible up until now,” said Knapper, a former U.S. deputy chief of mission to Seoul. “And we're looking for some flexibility on the part of the Korean side too."

His remarks suggest that Washington still expects Seoul to pay a higher contribution despite Korea reportedly offering a 13 percent increase compared to the previous year. Seoul officials have indicated this is the best offer. 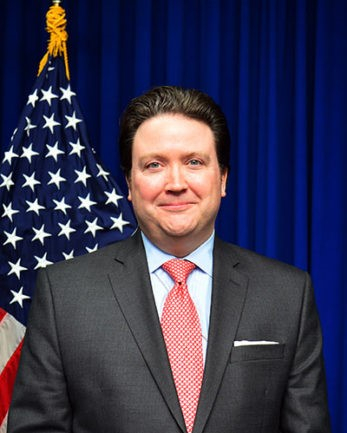 U.S. President Trump confirmed in a press conference in late April that he had “rejected” Seoul’s recent defense cost-sharing offer and has said he expects Korea to pay more for the upkeep of some 28,500 U.S. troops stationed in Korea.

“Clearly we continue to work on it,” said Knapper on the 11th SMA negotiations, and “would have preferred that we had wrapped those up by now.”

In the previous 10th SMA, signed in February 2019, Seoul agreed to pay 1.0389 trillion won, which amounted to some $920 million at the time, or about 8.2 percent more than what it spent the previous year. The Trump administration initially demanded some $5 billion annually, a nearly fivefold increase in Korea’s contribution, though Washington has since reduced that offer slightly.

However, the persisting coronavirus situation is making the scheduling of the next round of talks for the SMA difficult.

“The pandemic situation has really put a crimp on our ability to sit down face-to-face,” said Knapper, noting that the last “physical meeting” by Seoul and Washington’s chief negotiators for the SMA was in Los Angeles in March. At that time, there had been anticipation that the two sides were in the final stages of discussions.

But due to the delays in the sealing of a new SMA, over 4,000 Korean personnel working for the U.S. Forces Korea (USFK) have been unprecedentedly furloughed for an indefinite period of time since the beginning of April.

“It’s tough” conducting “this kind of intense negotiation” without meeting face-to-face, he said.

“Both sides are committed to seeing this through,” he said, adding it’s a matter of “when” not “if” a comprehensive SMA is achieved.

Knapper said following the April 15 general elections in South Korea, President Moon Jae-in has gained a super majority in the National Assembly which “puts wind in his sails, for a while, at least to take on some of his domestic priorities.”

He added that the Korean National Assembly is “now is in a position to fast-track any deal that comes before it,” adding he hopes that a new SMA, when struck, can move through the legislature “quickly.”

On denuclearization negotiations with North Korea, which have been at a standstill since last year, Knapper said, "As far as the United States is concerned, we remain open to diplomacy regardless of whatever conclusions Pyongyang has drawn. The door to diplomacy remains open." He stressed Washington’s continued commitment to the 2018 joint statement signed between President Trump and North Korean leader Kim Jong-un during their first summit in Singapore.

Knapper added, “We look forward to being able to sit down once again with North Korea. We are committed to diplomacy, committed to a peaceful resolution of tensions there, committed to resolving their nuclear and missile programs.”

Recalling the “fire and fury year” in 2017, he noted the close cooperation between Seoul and Washington at “every level” on Pyongyang issues, adding, “We do benefit from the extremely close contact we have, information-sharing, ensuring that we are on the same page, that our public messaging is in line.”

This coordination was most recently displayed amid the weekslong disappearance of North Korean leader Kim Jong-un, he said, which “invited a lot of good close info-sharing in Seoul and Tokyo.”

He added, “You really realize again in moments like this alliances, friendships count, and the U.S. benefits greatly from its alliances,” stressing that Washington’s “strength comes from our alliance relationships” with Seoul and Tokyo.

That is why “we pay so much attention to the relationship between Japan and South Korea as well,” he added, noting that Washington “did its best to try and facilitate contact between the two and an improvement in relationships” following the deterioration of ties between the two neighboring countries last year over a spat on trade and historical issues.

“Korea has really emerged as an exemplar of how to tackle and defeat the Covid pandemic as a democracy, using its openness and its transparency,” said Knapper, adding that the Republic of Korea (ROK) has “shown the world that it can be done.”

Knapper said that such cooperation between Seoul and Washington during the pandemic, including experts and officials sharing data and best practices and President Moon prioritizing sending 750,000 Covid-19 test kits to the United States last month are an indicator of “what a high-quality friendship we have with Korea.”

He added that “Korea was an exemplar on how to run an election during a pandemic,” noting measures in place during the April 15 elections including social distancing, spreading out the period to vote and creating special polling stations for infected individuals were “all tools for fellow democracies to study and eventually utilize when we have our own elections.”

The two sides also agreed on efforts toward a speedy sealing of a defense cost-sharing agreement, according to a Foreign Ministry official.

They agreed to strengthen bilateral cooperation, including on the Covid-19 response, “based on the rock-solid ROK-U.S. alliance,” according to the Foreign Ministry in a statement.

Pompeo congratulated Korea’s successful general elections on April 15 and “expressed appreciation to the ROK for sharing information and closely working together” on the coronavirus response, while Kang said that Seoul will continue to actively share its Covid-19 response experience with the United States and the international community.