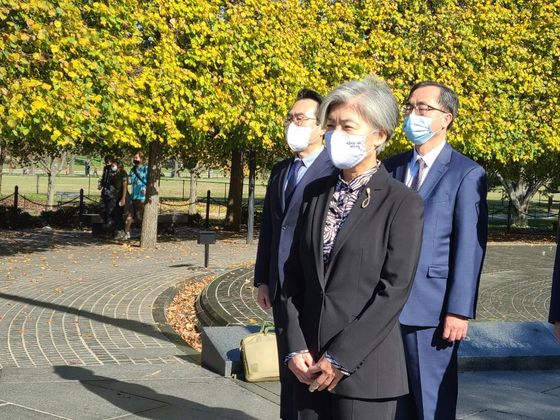 Korean Foreign Minister Kang Kyung-wha pays respects to U.S. soldiers killed in the 1950-53 Korean War on a visit to the Korean War Veterans Memorial in Washington on Sunday, after Joe Biden was named U.S. president-elect the previous day. She was scheduled to meet with U.S. Secretary of State Mike Pompeo on Monday. [YONHAP]


South Korean Foreign Minister Kang Kang Kyung-wha, on a trip to Washington Sunday on the heels of Joe Biden's victory in the U.S. presidential election, said she does not see the United States reverting back to a “strategic patience” approach to Pyongyang under a new administration.

“I don’t believe there will be a return to the strategic patience approach, which is from before the past three years of progress, according to various public remarks made from those close to Biden,” Kang told reporters after paying respects at the Korean War Veterans Memorial in Washington. “I believe we must build on the progress and results made in the past three years.”

The strategic patience policy of waiting out North Korea dates to the Barack Obama administration from 2009 to 2017, under which Biden served as vice president. U.S. President Donald Trump in July 2017 declared that the “era of strategic patience with the North Korean regime has failed” and held three meetings with North Korean leader Kim Jong-un in 2018 and 2019, though denuclearization negotiations have been at a standstill since last year.

Kang kicked off a four-day trip to Washington on Sunday to hold a meeting with U.S. Secretary of State Mike Pompeo Monday, an opportunity to reaffirm the Korea-U.S. alliance and discuss various bilateral and regional issues. The trip came on the invitation of Pompeo, who canceled a visit to Seoul last month amid a White House coronavirus outbreak.

However, Kang is also the first diplomat of a key ally of the United States to visit the country since Biden’s victory.

Kang was expected to meet with Biden’s advisers during the trip, though she has remained mum on exactly whom she would be making contact with during a delicate transitional period.

As President Moon Jae-in has offered congratulations to U.S. President-elect Biden over Twitter Sunday, Kang said she would more actively be able to pursue reaching out to Biden’s side.

Kang told reporters, “As our president publicly sent congratulations [to the president-elect], we will be able to more actively pursue areas that we have been cautious about until now.”

A Foreign Ministry spokesman last week said that Kang was expected to make contact with members of Congress and scholars at think tanks in Washington.

Kang was expected to more proactively reach out to foreign affairs and security advisers from the Biden campaign during this trip. There has been speculation that she may make contact with Sen. Chris Coons of Delaware, who has been mentioned as a possible U.S. secretary of state candidate, and Michèle Flournoy, a former under secretary of defense for policy under President Barack Obama, a defense secretary contender.

Biden was elected the 46th president of the United States Saturday, and his running mate Sen. Kamala Harris of California will become the first woman to serve as U.S. vice president. They will take office on Jan. 20 next year. Trump has yet to formally concede the U.S. election.

Biden in his victory address Saturday evening said that he sought the office "to restore the soul of America” and “to make America respected around the world again.”

Once Biden takes office, he is expected to be occupied with domestic issues such as containing the Covid-19 pandemic and unifying a divided country, but he has also pledged a return to Obama-era policies including rejoining the 2015 Paris climate change agreement and repairing global alliances.

During his last presidential debate against Trump on Oct. 22, Biden referred to North Korean leader Kim Jong-un as a “thug” and said he could meet with Kim “on the condition that he would agree that he would be drawing down his nuclear capacity.”

The Moon Jae-in administration has been working on prodding along the Korean Peninsula peace process, and the Korean president said Monday he plans to reach out to President-elect Biden and his advisers “in various ways.”

This marks Kang’s first trip to the United States since mid-January, where she met with Pompeo in San Francisco. The two envoys last met in person in Germany in February.

Kang said on her planned talks with Pompeo, “While I came during a sensitive period, Secretary Pompeo and I have always communicated, and he is my counterpart,” until the new administration takes office.

In contrast, North Korean state media has stayed silent on Biden's victory, likely taking a wait-and-see approach as it has often in the past.