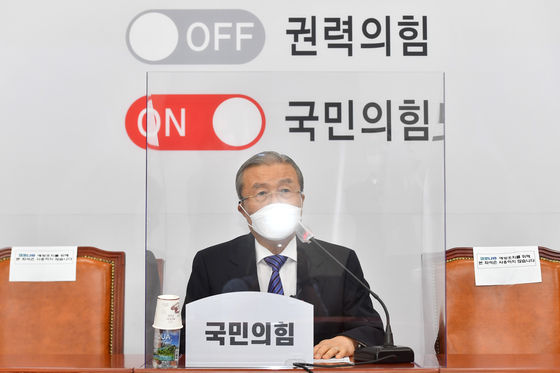 Kim Chong-in, acting leader of the main opposition People Power Party (PPP), speaks during a party meeting on Monday. Kim demanded that a special prosecutor be appointed to investigate Justice Minister Choo Mi-ae over allegations that she abused power to arrange special treatment for her son during his 2017 military service. [YONHAP]


The main opposition party on Monday demanded a special prosecutor be appointed to conduct an independent probe into Justice Minister Choo Mi-ae over allegations that she had abused her power to arrange special treatment for her son during his military service.

“This is not a case of parental love for a son that had gone wrong,” Kim Chong-in, acting chairman of the People Power Party (PPP), said during a party meeting in the morning. “Doing nothing about this scandal is an act of insulting and destroying rule of law.”

Kim called on Choo to immediately step down as more suspicions were raised that she arranged favors for her son during his military service in 2017. Choo has consistently denied the allegations. 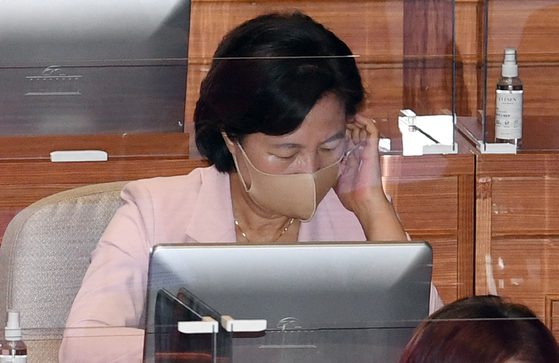 
Choo’s son, surnamed Seo, served his military duty in the Korean Augmentation to the United States Army, or Katusa, for the 2nd Infantry Division of the U.S. 8th Army from November 2016 through August 2018. Opposition lawmakers have alleged that Seo was let off the hook when he went AWOL in June 2017.

Based on anonymous statements provided by military supervisors of Seo, PPP Rep. Shin Won-sik said last week that Choo’s aide had requested an extension of Seo’s medical leave when he failed to return to the base in time. At the time, Choo was the chairwoman of the ruling Democratic Party (DP), and Shin said Choo abused the power of her office to intervene on her son's behalf.

Shin, a former lieutenant general who once served as the deputy chief of the Joint Chiefs of Staff, added to the allegations on Sunday, accusing top administration officials and the legislature of trying to influence a selection process of military interpreters for the PyeongChang Winter Olympics in February 2017 to grant a post to Seo.

Shin said an Army colonel in reserve, who had served as the commander of the Katusa forces, told Shin's aide that he was pressured by the office of the defense minister and the liaison office at the National Assembly to dispatch Seo as an interpreter to the sports event. The colonel, whose surname is Lee, said he had resisted the pressures to ensure fairness.

Serving as an interpreter at a global sports event is considered a rare, prestigious opportunity. Competition was fierce among Katusa soldiers to perform the mission, which would likely bolster their resume. At the time, the Army dispatched 65 soldiers as interpreters.

According to Lee, outside pressure was high to name Seo as one of the interpreters, but he resisted.

“He wasn’t assigned,” Lee told Shin’s aide. “Many requests were made from the office of the defense minister and liaison office of the National Assembly, but I said during a meeting that this will later become a problem [...] I changed the selection method to drawing lots.”

As a result, Seo was not selected, even after additional requests were made, Lee added.

Seo’s lawyer, Im Ho-seob, told the JoongAng Ilbo on Sunday that he has no information about the allegation.

Meanwhile, Seo released three medical records concerning his controversial medical leave. One of them was a doctor’s note from June 21, 2017, which was used to extend his medical leave.

Opposition politicians, lawyers and military sources said they have no doubt that Seo underwent medical procedures during those periods. They said the controversy is focused on how he was able to extend the medical leaves without going through proper channels, and that Seo was attempting to divert attention from the issue.

The PPP said Monday that Prosecutor General Yoon Seok-youl must appoint a special prosecutor to conduct an investigation into Choo. The Seoul Eastern District Prosecutors’ Office has been investigating suspicions surrounding the medical leave since February, but no progress has been made.

The system was introduced in 2010 and has been used four times — in each case, to investigate a prosecutor.

“This is déjà vu from the Cho Kuk scandal from last year, where the fairness of college admissions was destroyed,” PPP’s leader Kim said Monday. “Our youngsters want a society where everyone is equal in front of the duty to defend the country by serving in the military.”