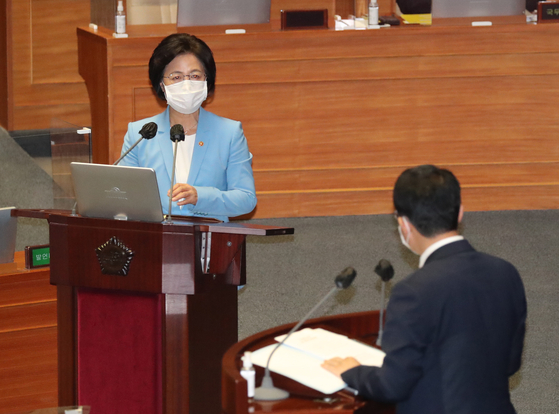 
Justice Minister Choo Mi-ae on Thursday rejected opposition lawmakers' accusations that she or her husband had made a request to the Ministry of National Defense to seek a favor for her son when he was serving in the military in 2017.

"I never made the request [to the ministry]," Choo said during a National Assembly hearing on Thursday. "I also checked with my husband and confirmed that he had never done so."

"I and my husband were always too busy with our work," Choo continued. "My children had to take care of their own matters."

Choo and her family have been battling allegations that her son, surnamed Seo, received preferential treatment when he was serving in the Korean Augmentation to The United States Army, or Katusa, from November 2016 through August 2018. At the time, Choo was the chairwoman of the ruling Democratic Party (DP).

Several whistle-blowers have alleged Seo was let off the hook when he failed to return to base at the end of a sick leave in June 2017, which had already been extended once. Suspicions were raised that Choo or her husband had telephoned the ministry to seek a second extension, and Seo was subsequently allowed to use personal days. Choo's aide at the time was also suspected of having contacted the military to extend the leave.

On Wednesday, Rep. Shin Won-sik of the opposition People Power Party (PPP) said he had received a tip from a member of the military.

"The ministry's call center reportedly received a phone call from a woman inquiring about the extension for Seo," Shin, a former Army general, said. "The caller was a woman, but she used the name of Choo's husband."

Since January, the Seoul Eastern District Prosecutors' Office has been investigating the case. As the probe was moving slowly, more whistle-blowers started talking to the PPP lawmakers and media about suspected favors Seo had received.

As new allegations were raised, prosecutors questioned Choo's son earlier this month and raided the Defense Ministry and Army's data centers on Tuesday. They seized records of phone calls related to the controversial extension of Seo's medical leave, sources informed about the probe have said.

Opposition lawmakers asked Choo on Thursday if she would be willing to ask Prosecutor General Yoon Seok-youl to speed up the investigation into her son.

"I am a subject of the probe," she said. "I cannot intervene."

During the hearing, Choo also urged the politicians to not defame her son.

"Please just see the truth as it is," she said.

In the face of aggressive attacks from the PPP, lawmakers of the DP stepped up their campaign to defend her. The DP members' efforts, however, may have backfired and further fueled the outrage directed at Choo.

On Wednesday, Rep. Park Sung-jun, spokesman of the DP, issued a statement to defend Choo and her son.

"During his military service, Choo's son took a medical leave and underwent a knee surgery in order to fulfill his duty as a soldier," Park said. "Our national hero Ahn Jung-geun said it is a soldier's duty to sacrifice one's body for the country, and Seo was carrying Ahn's philosophy into action."

One of the most respected patriots of the country, Ahn was a Korean independence fighter who in 1909 assassinated Hirobumi Ito, the first Japanese resident-general of Korea. At the age of 30, Ahn was executed in 1910 in a prison in China, and Park was quoting Ahn's last calligraphy written before his death.

Park's statement generated fierce criticism from the public, as well as from opposition politicians.

"How dare you mention Ahn to defend a case of foul play?" Rep. Kim Eun-hye, spokeswoman of the PPP, said.
Three hours later, the DP removed the sentence mentioning Ahn from the statement. Park also issued an apology later in the evening.

"I made an inappropriate quote and stirred up a controversy," he said. "I apologize for the incident and I will be more careful."

"The DP was not directly comparing my son to Ahn," Choo said Thursday. "They were just stressing that my son tried to do his best to serve the military although he was sick."

Earlier this week, DP Rep. Kim Tae-nyeon, floor leader of the party, created yet another flap while trying to defend Choo.

"I was told you can extend your leave from the military by making a request through phone call, email or Kakao Talk chat," Kim said on Tuesday.

Following Kim's remarks, the PPP said Kim was denigrating the military in order to protect Choo.

"Kim was treating the military service as if it is a camping trip," Rep. Yun Hee-suk of the PPP said.

The military said that a soldier, in theory, could inquire for an extension of his or her leave by using any possible means. But former and incumbent senior members of the military told the JoongAng Ilbo that in reality, no commander would grant an extension of a leave through a Kakao Talk chat.

As Choo was bombarded with questions about her son on Thursday, Prime Minister Chung Sye-kyun asked opposition lawmakers to stop grilling her and instead focus on other official business.

"We've been spending days on the Choo issue," Chung said. "The people must be disappointed. Let's leave it alone and discuss state affairs."

Chung also said anyone can call the Defense Ministry call center to make a request or an inquiry, adding that he does not think Choo would deserve criticism even if she had done so.