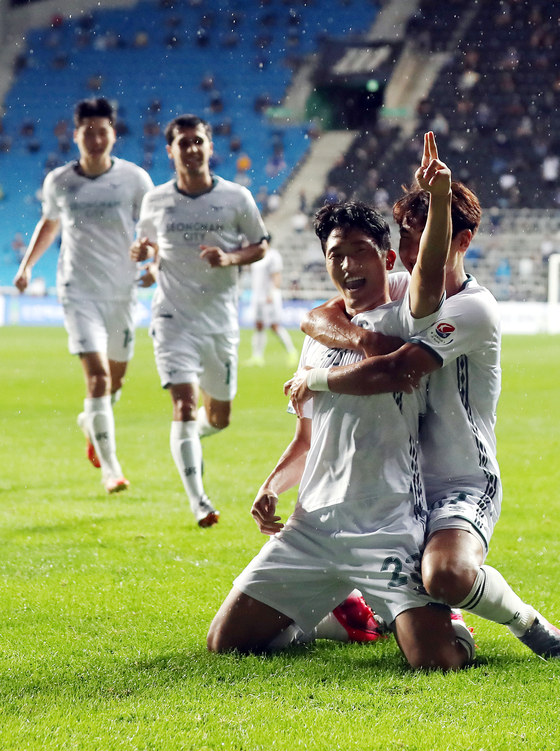 After just a few months with Seongnam FC, forward Na Sang-ho is already being called the next Hwang Ui-jo.

Na, who was a member of Korea’s U-23 national football team at the 2018 Asian Games, has earned the nickname “little Hwang Ui-jo” from Seongnam fans. Hwang, a Seongnam FC legend now playing for Bordeaux in France's Ligue 1, might just be the greatest striker the team has ever produced. Hopes are high that Na will one day take that title.

“I’m honored to be compared with Korea’s best striker,” Na said. “Ui-jo is my role model.”


Having joined Seongnam FC in June on loan from FC Tokyo, Na has scored four goals in 11 matches for Seongnam, immediately making him the highest scorer on the squad.

As of Monday, Seonganam is ranked eighth in the K League 1 with five wins, six draws and eight losses, totaling 19 points. Although they are in the second half of the 12-club K League 1 standing, they are still in contention to finish the season in the upper half of the split as they are currently tied in points and win-loss record with the sixth-ranked Gangwon FC and seventh-ranked Gwangju FC.

Seongnam is coming off a strong weekend, as they picked up a 2-0 victory against defending champion Jeongbuk Hyundai Motors at home at Tancheon Stadium in Seongnam, Gyeonggi.

The current leaders in the K League 1 are Ulsan Hyundai FC, who have picked up 14 wins, four draws and a loss, totaling 46 points — a good five points ahead of Jeonbuk.

Since Seongnam is competing for that sixth spot, the fans are especially pleased with the recent addition of Na.

“It feels even better that the fans recognize me,” Na said. “I will repay [the fans’] compliments all season long by scoring more goals.”

Switching to a different club mid-season and adjusting to their strategy is never an easy process. Although the fans and Seongnam’s head coach had high expectations for Na, they didn't want to pressure the young striker.

As it turned out, they needn't have worried. While it took Na a few games to adapt to his new club, he came into his own last month, scoring his first goal for Seongnam against Incheon United on Aug. 9.


Na also scored his second goal for Seongnam during that match.

“As a striker, I want to score goals every time I play,” Na said. “But as my struggle [to adapt] took longer than expected, I was getting worried. Thanks to my teammates’ encouragement, I was able to regain confidence.”

Na is desperate to live up to his "little Hwang Ui-jo" nickname. Hwang debuted with Seongnam in 2013, and after five seasons with the club, he signed with Gamba Osaka in Japan's J1 League.

Hwang was added to head coach Kim Hak-bum’s U-23 Korean national team roster for the 2018 Asian Games as one of three wildcards — older players permitted to join the squad. Hwang's inclusion was controversial at the time, as he wasn't seen as good enough for one of the coveted spots.

Hwang quickly silenced those critics, scoring nine goals throughout the tournament to lead Korea to gold. Nine goals was also good enough to win him the scoring title at the 2018 Asian Games.

That performance really put Hwang on the map, and he went on to become a regular on the Korean national football team, led by head coach Paulo Bento.

Na has been on a similar path to Hwang. Back in 2018 when he played for the K League 2 club Gwangju FC, Na won the scoring title with 16 goals.


That performance earned him a spot on the U-23 national team for the 2018 Asian Games. By joining FC Tokyo last season, he also became one of the many Korean footballers playing in foreign leagues — and, like Hwang, his first stop was Japan.

“By spending time with Ui-jo throughout the Asian Games, I got to respect him,” Na said. “By getting through the K League 2, Seongnam and the Japanese league, I think I’m sort of following in his footsteps.”

Although the 24-year-old still has quite some way to go to become like Hwang, his priority is to get recognized as the “best” in the K League.

“My priority is to put Seongnam in the upper split,” Na said. “Personally, I hope to [finish the season with] two-digit attack points. Then, I want to be added onto the [national team for the] 2022 FIFA World Cup in Qatar and then to head to Europe.”

Seongnam will continue its season with a match against Sangju Sangmu, the military club, at Sangju Civic Stadium on Saturday, Sept. 12, starting at 7 p.m.

The K League 1 will conclude its shortened regular season on Sept. 20. The league will then split into two halves. Seongnam is now competing to earn a spot in the top half, or Final A.