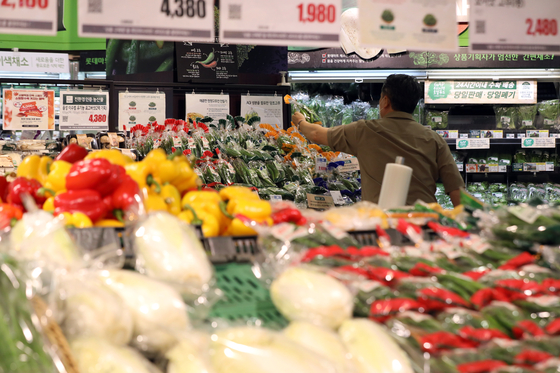 A visitor to a supermarket in downtown Seoul looks at the options in the vegetable section on Sept. 7. [NEWS1]

With food prices skyrocketing, many Koreans are rethinking their Chuseok holiday choices.

"I went to the market to buy ingredients for seasoned acorn jelly, but ended up just buying a cucumber," said a 34-year-old woman from Mapo District, western Seoul. "One hundred and twenty grams of lettuce costs 4,380 won ($3.70), while a green pumpkin goes for 4,280 won. Two cucumbers cost 4,050 won, and a bunch of spinach is about 6,780 won. Does this make any sense?”

According to the woman, it costs about 50,000 won to 70,000 won to prepare a meal for her family these days. Kim said she'd rather just buy meal kits or salads instead.

Chuseok falls on Oct. 1 — the rainiest of rainy seasons — which has been punctuated by two typhoons and has left many wondering how they are going to afford the holiday.

According to data collected by Korea Price Information, traditional offerings for ancestors — which include a wide variety of fresh foods — cost about 270,500 won at a traditional market, up 16.5 percent from last year. At a supermarket, it would cost 404,730 won, a 24.7 percent jump.

"The prices of chestnuts rose due to the reduced amount of imports amid Covid-19. Also, a lot of chestnuts fell to the ground because of the typhoons,” a spokesperson for Korea Price Information said. “This summer’s long downpour and scorching heat wave caused volatility in vegetable prices. The prices of beef, pork and rice also soared.”

According to the Korea Agro-Fisheries & Food Trade Corporation, the price of Napa cabbage on Tuesday was about 9,738 won, a 99 percent increase compared to the same period a year earlier. The price increased 58 percent over the last month.

The price of radishes has jumped to 3,703 won, a 94 percent increase compared to a year before. The prices of watermelons, perilla leaves, chives and cherry tomatoes rose between 30 to 80 percent.

As prices rise, food companies, who were already suffering from a sharp drop in sales due to the Covid-19 pandemic, are scrambling to reduce the amount of vegetables in their dishes or replace them with cheaper ingredients.

Last weekend, a Chinese restaurant in Yeouido, western Seoul, received a complaint from a customer because its stir-fried vegetables had no bok choy.

"I understand that restaurants are having hard time amid Covid-19," a customer said. "However, Chinese-style stir-fried vegetables without bok choy? It doesn’t make any sense.”

Some local restaurants which sell jokbal (pig's trotters) or hoe (raw fish), have recently announced that they cannot serve lettuce for a while.

"A box of lettuce costs about 90,000 won these days. It’s even more costly than pork," said one man who runs a restaurant.

Vegetables prices are likely to increase further until the Chuseok harvest festival.

Retail prices are likely to reflect the wholesale price changes in one or two weeks.

"Supermarkets don't apply changing vegetable prices every day, but prices will inevitably rise in the near future," said a spokesperson for a local big supermarket.