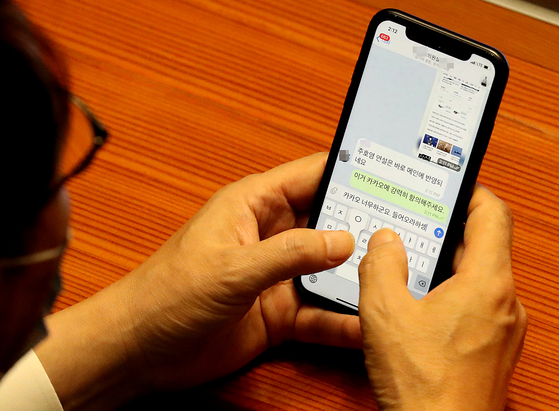 Rep. Yoon Young-chan of the Democratic Party is photographed sending a text message to an aide during a National Assembly session on Tuesday. [NEWS1]


Ruling party Chairman Lee Nak-yon rebuked a former presidential aide-turned-lawmaker for having tried to browbeat an internet news service after it highlighted an opposition leader’s speech.

“Yesterday, one of our lawmakers was caught sending an inappropriate text message about an internet portal during a National Assembly session,” Lee said during a leadership meeting of the Democratic Party (DP) in the morning.

“[Rep. Yoon Young-chan] said he wanted to complain to the portal because it did not carry fair coverage of the DP chairman’s speech and an opposition leader’s speech. Still, I believe his action can trigger misunderstanding.”

On Tuesday, photojournalists accredited to the National Assembly took photos of Rep. Yoon while he was sending a text message to someone. Photos of Yoon’s mobile phone screen showed that he had sent a captured image from the Daum portal of a speech by Rep. Joo Ho-young of the main opposition People Power Party (PPP) to an aide.

Joo gave the speech around 2 p.m. Tuesday at the National Assembly. DP Chairman Lee gave his speech on the previous day.
The aide responded to Yoon that “Joo Ho-young’s speech is posted immediately on the main page.”

“You must lodge a strong complaint to Kakao [the owner of Daum]," Yoon wrote to the aide. “Kakao is being unreasonable. Tell them to come to my office.”

Yoon was a former senior secretary for public affairs in the Moon Blue House. He was a Dong-A Ilbo journalist from 1990 till 2007 and an executive of Naver, another major internet portal, from 2008 until he joined the Moon Blue House in 2017. He left the presidential office in January 2019 to run in the April general elections.

He won his race in Jungwon District of Seongnam, Gyeonggi, and is a member of the National Assembly’s Science, ICT, Broadcasting and Communications Committee.

At a meeting of the committee later Tuesday, Yoon said he wanted to complain about the unfairness of Daum’s news selection. “When DP Chairman Lee gave his speech, I also monitored Kakao, and it was not on the main page,” Yoon said. “But as soon as Joo started his speech, reports were displayed on the main page, so I expressed my skepticism about its fairness.

“I asked my aide why the two speeches were covered differently,” he continued. “It is regretful that this issue is politicized. I think I have freedom to tell [Kakao] my opinion.”

Kakao said artificial intelligence programs, not its staff, are in charge of selecting and displaying news reports on the main page. 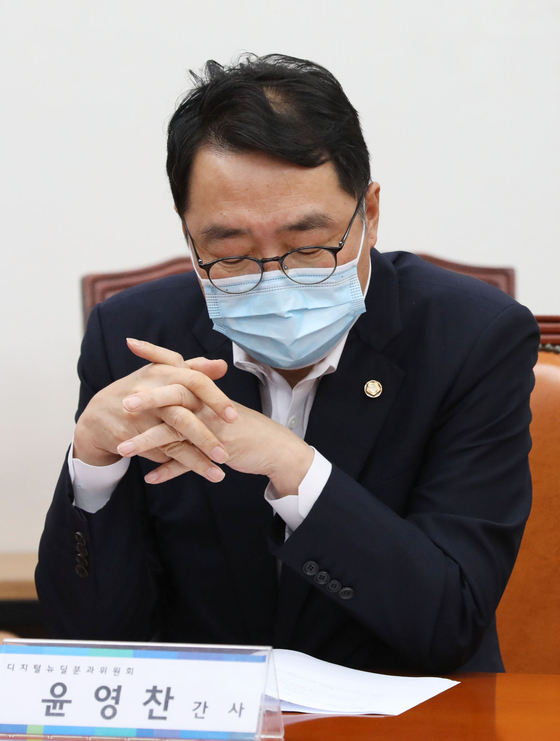 The opposition PPP fiercely attacked Yoon for trying to gag the internet portal. “This is a politics of fear that undermines freedom of the press,” Rep. Kim Eun-hye, spokeswoman of the PPP, said.

Rep. Kim Gi-hyeon said Yoon deserves a criminal probe because he is a member of the committee that directly oversees technology and internet industry.

“He should be charged with abuse of power and coercion,” Kim said. “We must take strong legal action against Yoon. He should also be judged by the Ethics Committee of the National Assembly.”

Opposition lawmakers on the Science, ICT, Broadcasting and Communications Committee held a press conference Wednesday demanding Yoon resign from the committee and give up his lawmaker seat. They also demanded a parliamentary investigation into any possible attempts by the Moon administration to gag the press, raising the suspicion that Yoon pressured news companies when he was working for the Blue House.

Other PPP members said there was a precedent from the Park Geun-hye Blue House in which an aide was convicted of contacting a broadcaster to complain about its reports.

In January, the Supreme Court convicted former lawmaker Lee Jung-hyun of having intervened in the news-making process of KBS, the national public broadcaster.

When he was serving as senior presidential secretary for public affairs for Park, he telephoned KBS to complain about a report that the Coast Guard did not make timely efforts to evacuate the Sewol Ferry when it sank in April 2014. He also tried to intervene in the editorial direction of the broadcaster’s news program later that month, the court ruled. The Supreme Court convicted Lee of violating the Broadcasting Act by infringing upon the broadcaster's editorial independence and fined him 10 million won ($8,400). It was the first conviction of a political figure for intervening in a broadcaster's news judgement.

Another PPP lawmaker, Park Dae-chul, said he proposed a bill on Wednesday to revise the Improper Solicitation and Graft Act, also known as the Kim Young-ran Act, to stop any attempt at influencing internet news service providers.

Park proposed that staff of internet news service providers such as Naver and Kakao should be governed by the antigraft act. The law currently covers public servants, workers in public institutions and journalists. Park said the portals must be treated as media companies.

“A precedent by the Supreme Court said an internet news service provider’s news service is essentially an activity of the press,” Park said. “Over 80 percent of news reports are consumed through portals operated by internet news providers, but they were left out of the law.”

Meanwhile, Yoon issued an apology on Wednesday afternoon. "It was my fault," Yoon wrote in a Facebook post. "I accept all criticism."

Machines haven't taken over yet, and that angers some