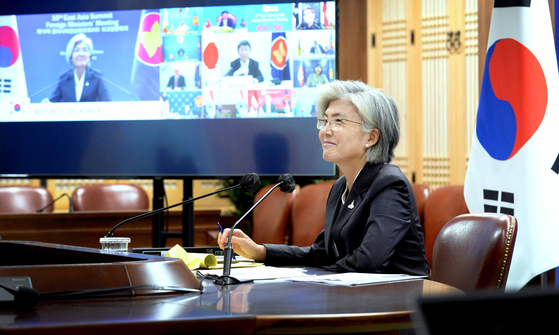 South Korean Foreign Minister Kang Kyung-wha speaks during the virtually-held 10th East Asia Summit (EAS) at the Foreign Ministry in central Seoul Wednesday, as a part of a series of Asean-related meetings set to run through Saturday. [FOREIGN MINISTRY]


South Korean Foreign Minister Kang Kyung-wha asked for the international community’s cooperation in moving the peace process on the Korean Peninsula forward, as she kicked off a series of virtual Asean-related meetings Wednesday.

Kang, during the 10th East Asia Summit (EAS), “stressed the importance of continued efforts toward the complete denuclearization and establishment of permanent peace on the Korean Peninsula,” according to Seoul’s Foreign Ministry Thursday.

Recognizing the difficulties moving along denuclearization talks with Pyongyang in the past year, Kang went on to request support from the international community, including members of the EAS, for the “faithful implementation” of the North-U.S. Singapore statement, two inter-Korean agreements made in 2018 and the “early resumption of dialogue” with the North.

The EAS meeting is comprised of foreign ministers from the 10 Association of Southeast Asian Nations and key players in the region, including the United States, China and Russia.

The Asean Regional Forum (ARF), EAS and Asean Plus Three meetings running from Wednesday to Saturday come at a critical timing amid rising Sino-U.S. rivalry, a prolonged standstill in denuclearization negotiations with North Korea and the coronavirus pandemic which has nearly halted face-to-face multilateral diplomacy.

Tensions as the United States and China lock horns over security and trade matters, including concerns over the militarization of the South China Sea, loomed over the meetings as each side is looking to gain international support.

U.S. Secretary of State Mike Pompeo during the EAS stressed “U.S. support for principles of openness, inclusiveness, transparency and respect for international law,” calling it a part of its Indo-Pacific vision, said Morgan Ortagus, spokesperson of the State Department, Wednesday.

Pompeo raised concerns over China’s “aggressive actions in the South China Sea” and for the “imposition of sweeping national security legislation on Hong Kong,” she added.

He also urged North Korea to abandon its weapons of mass destruction and ballistic missile programs.

Washington has been urging Seoul to participate in its Indo-Pacific initiative, seen as a strategy to contain China, and also has suggested South Korea participate in an expanded Quadrilateral Security Dialogue, or Quad, involving U.S. regional allies Australia, Japan and India.

Chinese Foreign Minister Wang Yi in turn accused the United States of intervening in the South China Sea and of being the biggest driver of its militarization.

Wang said, “Peace and stability is China’s greatest strategic interest in the South China Sea,” according to China’s Foreign Ministry.

Likewise, Kang said in the meeting that “peace and stability in the South China Sea is crucial for regional prosperity," according to her ministry in a statement, and stressed the importance of guaranteeing freedom of navigation and overflight in the area and the need to resolve the dispute peacefully through dialogue.

She further voiced expectations that countries would pledge to prevent actions that can escalate tensions and contribute to the militarization of the South China Sea, and for consultations to proceed on a code of conduct that can respect all countries’ interests in accordance with the international law.

Kang during the Asean Plus Three meeting, which brings together the 10 Asean countries and South Korea, China and Japan, stressed the importance of multilateral cooperation to combat the Covid-19 pandemic.

She also during the meetings highlighted Seoul’s continued efforts toward its New Southern Policy toward Asean countries.

The Vietnamese government, this year’s host of a series of Asean meetings, confirmed that North Korean Foreign Minister Ri Son-gwon would not be attending the ARF, scheduled for Saturday. The ARF is one of the few regional security forums regularly attended by Pyongyang, and North Korea’s ambassador to Hanoi is expected participate in the virtual meeting instead of Ri.

South Korean First Vice Foreign Minister Choi Jong-kun, on a three-day trip to Washington, was set to hold his first face-to-face talks with U.S. Deputy Secretary of State Stephen Biegun Thursday on efforts toward the peace process on the Korean Peninsula, among other bilateral alliance issues.

On Wednesday, Suh Hoon, the director of the Blue House National Security Office, held a phone call with U.S. National Security Adviser Robert O'Brien, and confirmed that the next several months will be crucial in getting North Korea back to denuclearization talks.