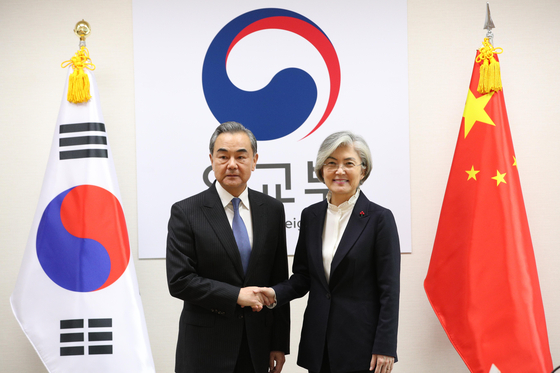 Seoul’s Ministry of Foreign Affairs said Friday that Kang will meet with Wang on Thursday in the first face-to-face meeting between the two countries’ top diplomats since the outbreak of the coronavirus.

The two sides are expected to discuss bilateral relations including coordination of Covid-19 responses, high-level exchanges, the Korea Peninsula situation, regional and global issues and other matters of mutual interest, said the ministry.

Wang last visited Seoul nearly a year ago — in early December 2019 — and his visit comes on Kang’s invitation. Kang and Wang have held 10 meetings so far.

“Councilor Wang’s visit to Korea is an extension of the high-level communication between Korea and China amid the Covid-19 pandemic and is expected to become an important opportunity to discuss ways to elevate our countries’ bilateral relations,” said the ministry in a statement. Aside from being foreign minister, Wang is also a Chinese state councilor.

Some issues that may be discussed in Seoul include coordinating a visit to South Korea by Chinese President Xi Jinping. President Moon Jae-in invited Xi to make a state visit this year, a trip initially expected to take place in the spring but was pushed back because of Covid-19.

Korea has also been working on a trilateral summit with the leaders of China and Japan to take place within this year. Such a trip would bring Chinese Premier Li Keqiang and Japanese Prime Minister Suga to Korea, the host of this year’s summit, in December. However, Suga has indicated previously he may not attend the summit because of disagreements over the wartime forced labor issue.

As Wang will visit Tokyo first, he may relay to Seoul what the prospects are for a trilateral summit to take place within the year.

Wang’s trip comes on the heels of the U.S. presidential election and could be seen as China’s push to solidify relations with South Korea and Japan, key allies of the United States, during an unstable period of transition between U.S. administrations.

Sino-U.S. tensions escalated in recent years, and analysts have also pointed out that U.S. President Donald Trump, despite losing his re-election bid, may attempt to exert further pressure on China before he leaves office on Jan. 20.

U.S. President-elect Joe Biden has been expected to continue some parts of Trump's tough stance on China, though perhaps with a more nuanced approach.

In a Foreign Affairs magazine article in March 2020 entitled “Why America Must Lead Again,” Biden called for “reinvesting in our treaty alliances South Korea and Japan.”

He also wrote on Beijing policy, “The most effective way to meet that challenge is to build a united front of U.S. allies and partners to confront China’s abusive behaviors and human rights violations, even as we seek to cooperate with Beijing on issues where our interests converge, such as climate change, nonproliferation, and global health security.”

Biden said during a meeting with a group of governors in Delaware Saturday on his approach to Beijing, that “It's not so much about punishing China, it's about making sure China understands they've got to play by the rules.”

Wang had been expected to visit Seoul last month, but the trip was delayed likely due to a key Communist Party meeting and also to await the results of the U.S. presidential election.

Yang Jiechi, a member of the Political Bureau of the Communist Party's Central Committee, visited Busan in August and met with Suh Hoon, the director of the Blue House National Security Office.