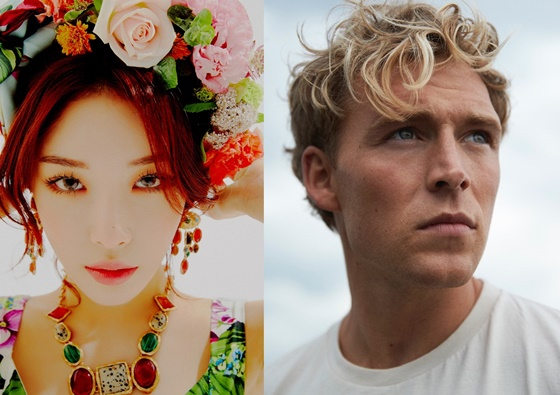 
A special collaboration between Chungha and Danish singer Christopher will be released on Sept. 23, the K-pop star's agency MNH announced this morning.


According to the agency, Christopher, whose concert in Korea this year was canceled due to the Covid-19 pandemic, expressed his desire to collaborate with a Korean singer on a duet that he’d been “treasuring for many years.”

Warner Music Korea apparently heard the song and suggested that Chungha would work best with Christopher on the song “Bad Boy.” The decision was made quickly, according to the agency, as Chungha was already a fan of Christopher and is familiar with his songs.

“Bad Boy” is a song about a purehearted man who pleads in honeyed accents to a girl he loves to love him back as he’ll become the “bad boy” she likes so much to win her heart. The song, according to MNH, has a K-pop vibe, quite different from the usual style of Christopher’s songs.

The Danish singer has a large following in Korea, where fans rate both his music and his looks. Christopher has often expressed his love for Korea since a concert here last year. After witnessing so many of his Korean fans singing along to hit song “Bad,” the singer said that the song is “probably one of my biggest, if not the biggest, song for me outside of Denmark.”

“It’s a song that exploded in Korea of all places,” the singer said in a virtual online concert he held three months ago, adding that his Seoul concert was “one of the best shows of all time.”

Chungha made her solo debut in 2017 and has released hits including “Why don’t you know,” “Roller Coaster,” “Stay Tonight” and “PLAY,” among many others.

[CELEB] One world tour later, The Boyz are back in town