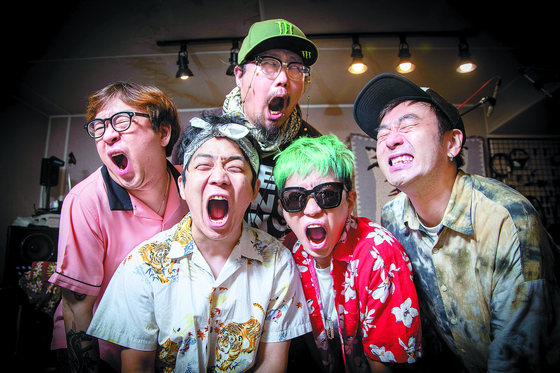 
Musicians come and go in the fast-paced music industry with only a few succeeding in engraving their names and music in the heart of listeners. This feat is even harder for musicians from less-preferred genres on home soil such as punk rock.

When five-member punk rock band Crying Nut broke onto the music scene in 1995, the band seemed like misfits in a sea of crooners clad in tidy suits with neatly parted hair.

But the band survived the turbulent history of the music industry from the days of cassette tapes to the MP3 era to the most recent online streaming services.

“On our 20th anniversary [from our debut], I didn’t know it was such an amazing thing to perform as a band for 20 years. Playing music was a matter of course for us, like eating and sleeping. We did our thing and one day we found 20 years had passed in a blink,” said Kim In-soo, who plays accordion and keyboard at Crying Nut.

“After our 20th anniversary, every year felt so long, and I found my health was deteriorating one year after another. On our 25th anniversary, I finally realized that we’re great and amazing in a way because we'd stayed together for this long,” Kim added when he was asked how he feels about the band’s 25th anniversary during a recent interview with the JoongAng Ilbo, an affiliate of the Korea JoongAng Daily.

The other four members began to add their thoughts about growing old. Some of them said they find “their hair becoming thinner” or they keep seeing “ads for medicines that are good for hair loss on SNS.” 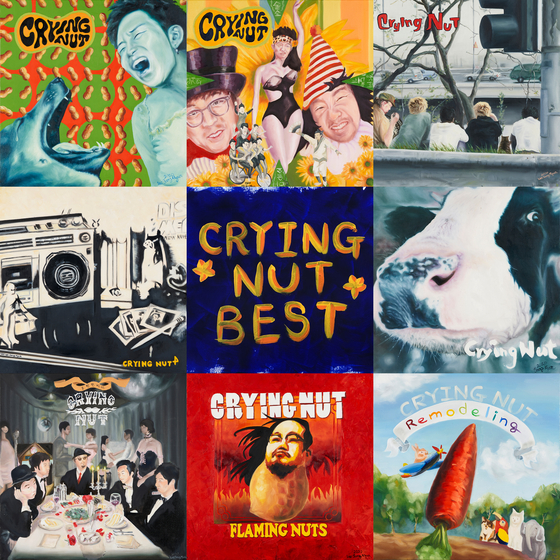 
All of the bandmates are friends from childhood who grew up in Ichon-dong in Yongsan District, central Seoul. They went to the same schools all the way from elementary to high school.

Marking the 25th anniversary of its debut, the band wanted to archive the music it has made so far into a single album.

A total of 16 tracks were included on the album, and an LP version of the album will be released sometime in November.

All the tracks were newly recorded at CJ Azit Tune Up Studio, which is furnished with the latest recording equipment, located in Sinjeong-dong, Mapo District, western Seoul.

“It’s embarrassing to listen to old recordings of us. It feels like I’m reading my old diaries,” said Park Yoon-sik, the main vocalist. “The first album was especially awful. The guitar was not properly tuned and our songs were close to barking, not singing,” added Park with a laugh.

The best-of album includes hits such as “Deep into the Night” (2001) and “Isn’t That Good?” (2007) as well as other tracks that the band members wished to record again.

“In the old days, we were full of anger, therefore we sang with that spirit, but now we have all become benign,” said Lee Sang-hyuk, the drummer.

For the special album, Lee Sang-myun, the guitarist, made a parody of the previous album covers of the band with oil paintings after he had to stop performing last year due to when he fractured his arm.

Along with releasing the special album, Crying Nut plans to hold a concert on Oct. 17 at Sfactory in Seongsu-dong, Seongdong District, eastern Seoul. An exhibition, which chronicles the history of the band, is also scheduled.

The concert and the exhibition were initially planned to take place on Sept. 19 but was postponed due to the sporadic and sudden surge of daily coronavirus cases.

“We prepared a lot for the concert and the exhibition, but safety comes first,” said Han Kyung-rock, the bassist. “We’re also seeking other opportunities in which we could meet our fans online,” he added.

The band held concerts in recent months without an audience due to the pandemic. “We came to realize how much the audience means to us,” said the band in unison.

Park said, “Only when there is an audience we gain energy from them and perform to our best abilities, but it felt like we were singing at the wall.”

When asked the band’s wish for the upcoming 30th anniversary: “I want to keep going without resorting to memories,” said Han.

“They say a generation lasts for 30 years. So my dream is to become a band that goes beyond a generation and sees a whole family come to our concert,” said Park.