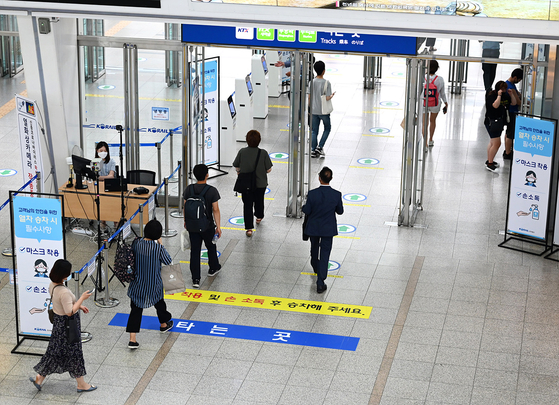 
There are already signs that things are going to be very different for this year's Chuseok holiday, as many people cancel the traditional trip home in favor of staying socially distanced at home.

It's already clear that people have taken the advice not to travel this Chuseok, which starts on Sept. 30, to heart, with train ticket reservations — normally quite literally the hottest ticket in town — dramatically down.

Signs that less people expect to be back in their hometowns for the traditional jesa ceremony and visits to ancestors' graves can also be seen in a marked increase in demand for grave care services.

This change in Chuseok plans isn't necessarily seen as bad news by everybody. Many of the nation's daughter-in-laws — generally expected to go to their husband's parents' home for the holiday, often with the expectation that a significant amount of cooking and housework will be taken care of — might be breathing a sigh of relief.

Younger Koreans in general seem less willing to take the risk of traveling this year. One joke trending online at the moment plays on the Korean portmanteau "untact," combining the prefix "un" with the word contact, meaning contactless.

"Your ancestors are already untact," the joke goes. "But if you contract the coronavirus, you could end up in direct contact."

The message is clear — people don't feel that there is a need to physically travel somewhere to honor their ancestors this Chuseok, and doing so could be a dangerous, or even fatal, decision.

“My in-laws are in South Gyeongsang, so we travel by train every year to visit them. But this year, we didn’t even look into train tickets,” said one office worker who wished to remain anonymous. “I am just waiting for a call from my mother-in-law telling us not to come.”


This year’s Chuseok will be the first major Korean holiday with social distancing measures in effect, and, although it's an especially long holiday this year as it runs straight into a weekend, ticket reservations have fallen to half of last year's number.

“The last time I told my in-laws I could not visit them for the holiday was during my last month of pregnancy,” said Ms. Park, an employee at a distribution company in Seoul. “My mother-in-law told me not to bother coming over for this year’s Chuseok.”

A joint survey conducted by job search portals Job Korea and Albamon on 855 office workers showed that 30.8 percent will stay home as much as possible. The average travel expenses for office workers this year are estimated to be around 350,000 won ($300), about 30,000 won less than last year.

As the holiday approaches, companies are struggling to create protocols for employee travel. SK Telecom decided to halt its annual employee Chuseok bus service this year. An employee at SK Telecom said the move was an effort to prevent the spread of Covid-19.

SK Telecom's bus decision appears to be the most concrete action any company has taken so far, as most companies are looking to the government for guidance. Actively discouraging employees from taking part in one of the most important holidays in the Korean company isn't a step they want to have to take.

“Encouraging travel will likely upset the employees, but not taking any action will not make a great impression on the government, so it is a dilemma,” said a human resources team leader at a subsidiary of a major firm.


A lot of people obviously aren't waiting for their companies to make a decision, as can already be seen through sales of gifts and services.

The grave care business is seeing an increase in demand compared to last year, as there are already more than 46,000 reservations with several weeks left until Chuseok. People would normally visit and tidy the graves of their parents or grandparents during the holiday.

At department stores, sales of luxury gifts have already surpassed last year. Hyundai Department Store has seen sales of its Korean beef set, priced around 800,000 won, more than triple. Emart has increased its supply of Korean beef sets by 30 percent.

“There are now more people that decided to send gifts in lieu of visits — the untact Chuseok season has become the mainstream,” said a spokesperson for Hyundai Department Store.

The Ministry of the Interior and Safety will roll out a service on Sept. 21 called “Ehaneul,” an online ‘untact’ program for visiting ancestral graves. The service lets users create images of the traditional memorial service tables for jesa and share them with their extended families.