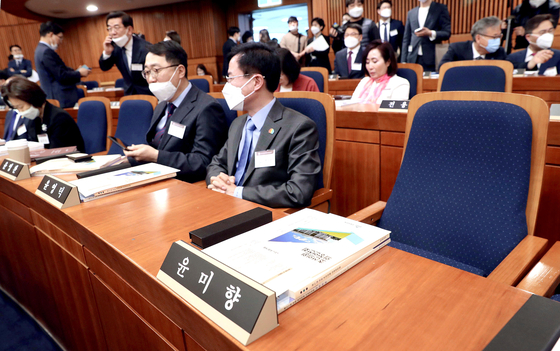 The seat for Democratic Partylawmaker-elect Yoon Mee-hyang at a National Assembly seminar for first-termrepresentatives is empty on Wednesday. [OH JONG-TAEK]


Lawmaker-elect Yoon Mee-hyang abruptly canceled all public activities including a meeting with foreign correspondents as suspicions snowballed that she politically exploited victims of sexual slavery during World War II and misappropriated donations.

Yoon, a proportional lawmaker-elect for the ruling Democratic Party and the former head of the Korean Council for Justice and Remembrance for the Issues of Military Sexual Slavery by Japan, skipped a seminar at the National Assembly on Wednesday for 151 lawmakers-elect who will start their first terms later this month.

Yoon also canceled a press conference at the Seoul Foreign Correspondents’ Club scheduled for Wednesday afternoon without explanation. She and the current leader of the Korean Council were supposed to brief the reporters about the scandal before abruptly canceling the event on Tuesday.

A Thursday dinner for DP proportional lawmakers-elect with Lee Nak-yon, a former prime minister who is also a lawmaker-elect, was also scrapped.

The scandal surrounding the activist-turned-politician started earlier this month with a bombshell revelation by Lee Yong-soo, a 91-year-old sexual slavery survivor, who are also known as "comfort women." In a press conference on May 7, Lee said former comfort women have been politically exploited for three decades by the Korean Council and Yoon, expressing skepticism about their financial transparency and integrity. Lee said Yoon is unfit to serve as a lawmaker.

Media reports followed about dubious accounting and suspicious money management of the civic group. Yoon and the Korean Council were also accused of pressuring survivors to reject restitution offered by Japan, presumably to keep the matter unresolved in order to continue their activities.

The DP said Wednesday that it will wait for the outcomes of an outside audit commissioned by the Korean Council and the Ministry of Interior and Safety’s own audit before formally responding to the scandal.

“It is the party’s position that checking on the facts about the alleged accounting fraud of the Korean Council is the first step,” said Rep. Kang Hoon-sik, chief spokesman for the DP.

Speculation was high that the party would debate expelling Yoon Wednesday, but the leadership postponed any decision. “It is not right to [take an action such as expulsion] just based on reports,” Kang said.

Kang also said the party has no immediate plan for an internal probe into Yoon. But he admitted that concerns are growing as more accusations are made against Yoon.

Kang rejected the main opposition United Future Party (UFP)’s demand for a parliamentary investigation. “I think a parliamentary probe is too much,” he said, “whether it is a probe into Yoon or into the Korean Council.”

The prosecution on Wednesday started a probe into suspicions surrounding Yoon and the Korean Council. “The Seoul Western District Prosecutors’ Office will investigate all criminal complaints against Yoon,” said an official of the Supreme Public Prosecutors’ Office. So far, six complaints were made against Yoon and the Korean Council. They were accused of embezzling donations and committing breach of trust.

A team of prosecutors and investigators conducted a raid on the Korean Council's office in Mapo District, western Seoul, Wednesday afternoon, after obtaining a search and seizure warrant from a local court.

The Kyunghyang Shinmun reported Wednesday that Yoon visited Daegu on Tuesday and met with Lee, the survivor who made the bombshell revelations against her and the Korean Council. According to the newspaper, they met for about 10 minutes and Yoon dropped to her knees and offered an apology.

Quoting some people at the meeting, the newspaper said Lee shed tears as Yoon offered an apology. Lee told Yoon that she will hold a press conference in Daegu on Monday and Yoon should be there, the report said.

As more allegations about the operation of the Korean Council were made public, the DP, which has long been associated with activists, tried to stop the scandal from tainting other civic groups.

“The suspicion about the Korean Council’s accounting records must not damage the reputations and operations of other healthy civic groups,” Rep. Noh Woong-rae said in a radio interview on Wednesday. “The party is taking this matter very seriously.

“Even if the Korean Council did commit accounting errors, its activities should not be denied,” he continued. “We need a careful approach. The 30-year history of their advocacy for comfort women must not be denied.”

The UFP, however, said the scandal is just the tip of the iceberg. They said the civic groups were operating without proper oversight, although they became rich and powerful.

“This is not a just problem of the [Korean Council],” said Cho Hae-jin, a UFP lawmaker-elect, in a radio interview. “It is a ticking time bomb that will explode [and affect] overall civic society.”

“Civic groups run on state subsidies, and public donations have grown so big that they now purchase buildings and manage large funds,” Cho said. “They are not commercial enterprises, but they grew large enough to hire many workers. I’ve always wondered about their accounting transparency.”