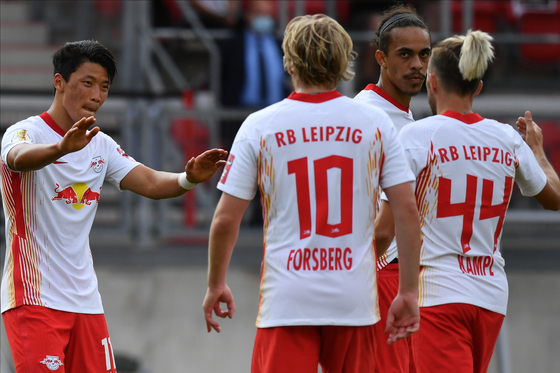 Hwang Hee-chan of RB Leipzig, left, celebrates with his teammates after scoring his first goal of the season during the DFB-Pokal Cup against FC Nurnberg in Nuremberg,Germany, on Saturday. [EPA/YONHAP]


Korea's international footballers playing in leagues across Europe are looking strong after their first competitive fixtures of the 2020-21 season.

Hwang Hee-chan of RB Leipzig got off to an impressive start over the weekend. During RB Leipzig’s first round match at the DFB-Pokal Cup against Nurnberg at Max-Morlock-Stadion in Nuremberg, Germany, on Saturday, Hwang scored his first goal with his new team.

While Leipzig was leading 2-0, Hwang scored in the 90th minute to extend his side’s lead to a 3-0 victory.

The game against Nurnberg was the team's first competitive game of the new season, ahead of the start of the Bundesliga on Sept. 20. Hwang joined Leipzig on a five-year contract in July after spells at Hamburger SV and FC Liefering. His first goal for his new club literally couldn't have come any earlier.

Along with his first goal, Hwang left a strong impression in his debut performance, picking up an assist as well for Yussuf Poulsen’s goal in the 67th minute.

With the win, RB Leipzig cruised to the second round of the DFB-Pokal, with the next round to take place just before Christmas, either on Dec. 22 or 23.

RB Leipzig will play their first Bundesliga match of the 2020-21 season against Mainz on Sunday, Sept. 20, at Red Bull Arena Leipzig.

Hwang wasn't the only Korean footballer finding the net in the DFC-Pokal.

Lee Jae-sung of Holstein Kiel also scored during his side’s first round match against Rielasingen at Holstein-Stadion on Sunday.

While second-tier Bundesliga club Holstein Kiel was leading 2-1, Lee scored in the 22nd and 24th minutes to extend Holstein’s lead to 4-1. The club went on to score three more goals to pick up a big 7-1 victory.

Kwon Chang-hoon of SC Freiburg also had a strong match in his club’s first round of DFB-Pokal match against SV Waldhof. Freiburg, a Bundesliga club, got off to a quick start with Kwon finding the back of the net in the 19th minute.

Although they allowed SV Waldhof an equalizer in the 57th minute, Freiburg’s Jonathan Schmid scored the winner in the 79th minute for a 2-1 victory.

Elsewhere in Europe. Lee Seung-woo of Sint-Truidense V.V. had a great start as he found the back of the net twice in the Belgian Pro League match against Antwerp. Although Sint-Truidense lost the match 3-2, Lee scored both goals, in the first and 23rd minutes.

Lee Kang-in of Valencia CF may not have scored a goal in his game, but he did pick up two assists during a La Liga match against Levante on Sunday. Lee became the youngest player two assist two goals in La Liga this century.

Unstoppable Napoli roll over Spezia for another big win

Hong Hyun-seok scores for K.A.A. Gent in 3-2 loss to Genk