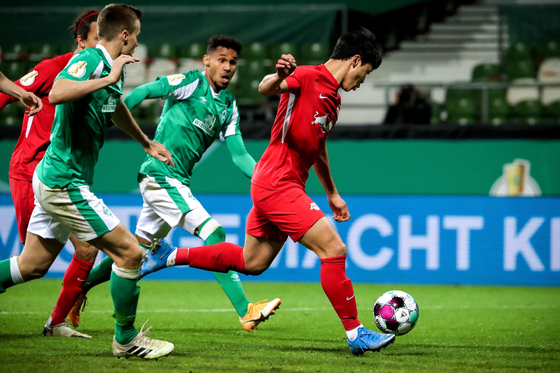 
Hwang Hee-chan scored a crucial goal and picked up an assist in RB Leipzig's 2-1 win over Werder in the German DFB Cup semifinals on Friday.

Hwang started his night on the bench on Friday night, watching the entire 90 minutes while neither Leipzig or Werder were able to get anything across. With the game heading into extra time and the cup final on the line, both teams made a series of substitutions to inject some more energy into their sides.

Hwang entered the game in the 90th minute and immediately made his presence known. Just three minutes into extra time, Hwang picked up a deflection in the box, dribbled his way around a defender and calmly sent it across the goal past Werner goalkeeper Jiri Pavlenka to take the score to 1-0.

That should have been enough to see Leipzig through to the final, but a costly defensive mistake at the end of the first half of extra time leveled the playing field.

Leipzig defender Dayot Upamecano attempted to pass the ball back to goalkeeper Peter Gulacsi, but the badly timed pass was intercepted by Werner's Leonardo Bittencourt, also a substitute, who beat the keeper to take the score to 1-1.

The second half of extra time was largely uneventful. Just when the game seemed to be heading into penalties, Leipzig managed to break through in injury time.

Hwang was in the middle of the action again, heading a well placed cross across the box to striker Emil Forsberg, who appeared to use his knee to beat the keeper and score the game-winning goal.

Leipzig walked away with a 2-1 win to advance to the German DFB Cup, where they will face Dortmund on May 13.

All three goals in Friday's game were scored by substitutes.

Hwang joined RB Leipzig last year after spells at Hamburger SV and FC Liefering on loan from FC Red Bull Salzburg. Last season, Hwang scored two goals across 20 appearances for Hamburger SV. He is also a regular on the Korean team and was a member of the 2018 Asiad winning squad.

Hwang has a slow start with Leipzig this season. In 15 Bundesliga appearances he has failed to score any goals or pick up any assists. He has also appeared in three UEFA Champions League games with no goals and no assists.

In cup games his performance has been much more impressive, with three goals and two assists in four matches.