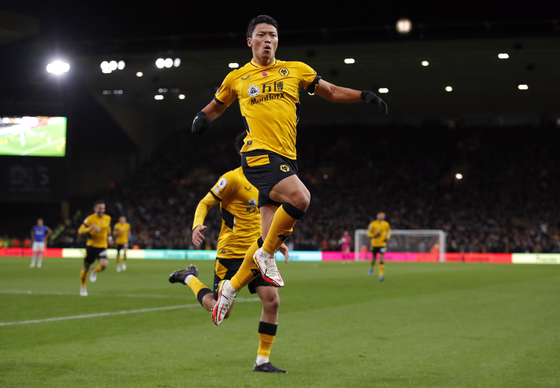 Wolverhampton Wanderers' Hwang Hee-chan celebrates scoring a goal against Everton that was later disallowed after a VAR review on Monday. [REUTERS/YONHAP]


Wolverhampton Wanderers have reportedly already reached out to RB Leipzig in an effort to speed up talks to purchase Korean striker Hwang Hee-chan.

According to The Telegraph, Wolves have already contacted Leipzig to discuss exercising their option to purchase the star, who is currently on loan with the Premier League club.

Hwang joined Wolves at the end of August on loan for the entirety of the 2021-22 season, with the club reportedly maintaining the option to buy Hwang for around £14 million ($19 million). Since then, the young striker has scored four goals in eight games, even making it onto the scoresheet during his very first match.

Hwang's arrival in Wolverhampton was initially met with some skepticism. The Bull arrived in the Premier League after playing for RB Leipzig last year, having an uncharacteristically quiet season with no goals scored in only 18 appearances.

Hwang's season was disrupted after he contracted Covid-19 while appearing with the Korean national team in Austria in November, but he still made a name for himself as a playmaker with the German side. For Wolverhampton Wanderers fans looking at a sheet of stats, however, The Bull didn't look like a particularly impressive acquisition.

But dig a little deeper and there were a lot of indicators in Hwang's early career that he had more to offer than last season's numbers suggest.

Premier League news website Footballfancast.com on Wednesday ran a poll, asking readers to vote whether Hwang was worth the £14 million price tag. As of press time on Thursday, 96 percent of readers said he was.