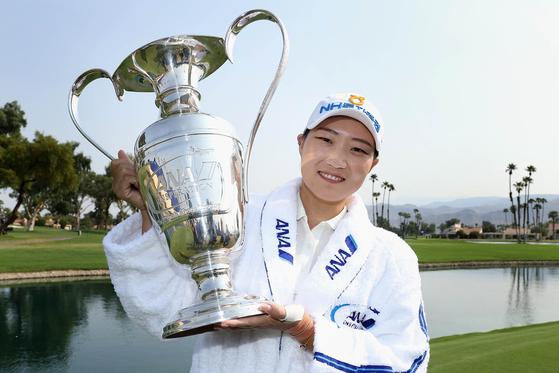 Lee Mi-rim poses for a photo with her trophy after winning the ANA Inspiration in a sudden-death playoff at the Dinah Shore course at Mission Hills Country Club in Rancho Mirage, California, on Sunday. [GETTY IMAGES/YONHAP]


With the mercury pushing 38 degrees Celsius (100 degrees Fahrenheit) on a hot September day in California, Lee Mi-rim picked up her first-ever major title on the LPGA Tour at the ANA Inspiration. And she did so in style.

With three birdies, an eagle and a bogey, Lee shot five under par, 67, on the final day to win the LPGA Tour’s second major tournament of the season at Mission Hills Coutry Club, Dinah Shore Tournament Course in Rancho Mirage, California, on Sunday.

Lee, who started the final round two shots behind co-leaders Brooke M. Henderson of Canada and Nelly Korda of the United States, got off to a quick start by adding her first birdie of the day on the par-4 second.

But as both Henderson and Korda made birdies on the same holes, it seemed unlikely that world No. 94 Lee had a chance of closing the gap. But as co-leaders continued to make birdies, Lee followed doggedly behind with her second birdie of the day on the par-4 sixth, where she chipped in for a birdie.

On the par-5 18th, Lee grabbed her 5-wood and went for the green on her second shot. She missed, and was left with a chip shot for her third shot.

That could very well have been the end for the Korean golfer, leaving her with a very respectable third place, but Lee wasn't finished yet. Defying the odds, she chipped in for an eagle on the final hole to secure herself a spot in a three-way sudden-death playoff. With that eagle on the final hole, Lee finished tied for the lead with a four-day total of 15 under par, 273.

“My plan for 18 was just to have a birdie and do what I have to do to keep my head up,” Lee was quoted as saying on the LPGA website. “And when the shot went in, I think I was really surprised.”

As Lee played two groups ahead of Henderson and Korda, she had to wait for them to finish their rounds. Once the two players finished at 15 under par, Lee was quickly on the phone to her friends back home in Korea.

“My friends said a lot of words of encouragement and do your best, win, and come back home,” Lee told Golf Channel.

That encouragement may have been exactly what she needed.

Heading back to the par-5 18th with Henderson and Korda, Lee wasn't able to replicate the miracle of her last turn on the hole, but she didn't need to. Sticking to her original plan, Lee finished the playoff with a 5-foot birdie putt.

As both Henderson and Korda made pars, Lee was declared the winner of this year’s ANA Inspiration. Remarkably, Lee took the victory without ever leading the field.

“I can’t believe it,” Lee told Golf Channel after her victory. “Honestly, I had no emotions [in the playoff], I just told myself [to] finish this quickly.”

With a victory, Lee took home prize money of $465,000 and her first-ever major title on the LPGA Tour. This is Lee’s fourth LPGA Tour win and is a long awaited one as she hasn’t picked up a win since the Kia Classic back in March 2017. With another playoff win, the 29-year-old improved her LPGA playoff record to two wins and a loss.

Lee's victory looks even more dramatic when looking at her performance at the ANA Inspiration last year. In 2019, Lee was nowhere close to a victory at the ANA Inspiration as she missed the cut. Prior to her victory on Sunday, the 94th-ranked golfer's best finish at the tournament was tied for 11th, back in 2015.

Lee is one of many Korean golfers to join the LPGA Tour after paying on the KLPGA Tour. During her career in Korea, she picked up three wins before joining the LPGA Tour in 2014.

In her rookie season, Lee picked up two victories. Her first win was in August 2014, at the Meijer LPGA Classic, where she won by defeating former world No. 1 Park In-bee in a sudden-death playoff.

Then, in October that year, Lee picked up her second win at the Reignwood LPGA Classic. Following her two wins, it took Lee until 2017 to pick up her third victory on the LPGA Tour.

The ANA Inspiration is normally the first major tournament of the season, but due to the coronavirus pandemic, the tournament was postponed to September and is the second major of the season, after the AIG Women’s Open, also known as the women’s British Open.

Followed by Lee, Amy Yang was the second best Korean golfer in the field as she finished the tournament tied for 15th, with a four-day total of seven under par, 281.

The LPGA Tour will now be heading to Portland, Oregon, to continue its season at the Cambia Portland Classic, scheduled to run from Sept. 17 to 20.