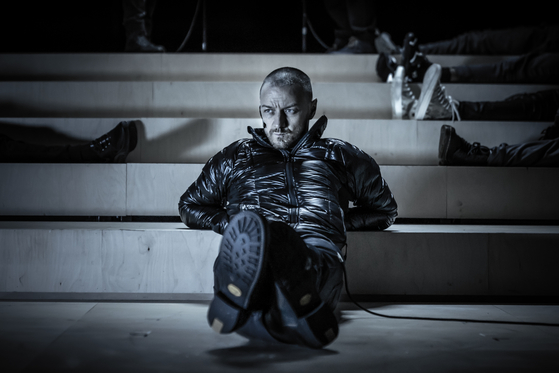 
Cyrano is a man with low self-esteem due to his oddly large and funny-looking nose. He becomes daring and even aggressive toward those who mock him. But with Roxane, a charming woman whom he loves, he becomes timid, believing that she will never love him back.

Perhaps due to the globally appealing storyline that many people can resonate with, the play has been adapted in various genres including musicals, opera, film and has even turned into a book.

The latest version of the play, directed by Jamie Lloyd, which will be screened at the National Theater of Korea’s NT Live — a broadcasting project of world-class theater — in October, won't just win the audience's sympathy, it will also fascinate them with words.

Using Martin Crimp’s adaptation of the screenplay, Lloyd turns the stage into a rap battleground at one point, and then into a powerfully emotive poetry recital session at another, both of which will amaze with the power of words.

Casting heartthrob James McAvoy to play the role in this modern play that depicts the 17th-century Paris, was a magic move.

The stage is empty. There are no props, other than a couple of microphones that the actors use and some chairs. There’s no backdrop and no costumes. Not even the bizarre-looking nose that usually gets stuck on the actor’s face who plays Cyrano makes an appearance. Only through glorious language and McAvoy’s acclaimed acting does Lloyd create one great performance.

The play, which premiered at the Playhouse Theatre in London late last year, received high praise from theater critics from renowned papers like The New York Times and The Guardian.

What Lloyd uses to grab the audience’s attention to his latest play is simplicity. He doesn’t use stage design, props or costumes that would help audience members to easily comprehend the atmosphere of 17th-century Paris.

The completed play in fact, will rather remind you of a rehearsal stage. Actors appear wearing modern clothing, as if they've just turned up to work and didn't have time to change. They speak their parts using standing microphones. The setting of Lloyd’s “Cyrano de Bergerac” still takes place in 1640 France, using the original storyline, but thanks to Crimp’s postmodern retooling of the screenplay and Lloyd’s brave modernization of the staging, "Cyrano de Bergerac” is no longer the classic play that many people have grown out of.

The modern, minimal stage that appears as if it can do nothing to immerse the audience into the play taking place centuries ago, instead stimulates the imagination.

Instead of using prop swords in a battle scene, the actors plunge the standing microphones into each other. They touch McAvoy’s average-sized nose as if it’s so huge and weird.

In Act 2, a man appears on the stage with a paint brush and writes something on the blank, white backdrop. It takes a while for one to comprehend what it says — what Lloyd has intended I believe.

Then as the man leaves the stage, the statement becomes legible: “I love words. That’s all.”

This bare confession is so strong, it makes you admit the genius of the director and understand why he emptied out the stage.

I personally believe the play was especially immersive because it is a recorded version. Usually, performances seen through NT Live seem to reduce the emotions you get from a real live theater. But through the many close-ups of McAvoy who gazes directly at the camera despite speaking to Roxane, you become helplessly deluded as if he’s confessing his love to you. Men are no exception as you’ll see in the play. 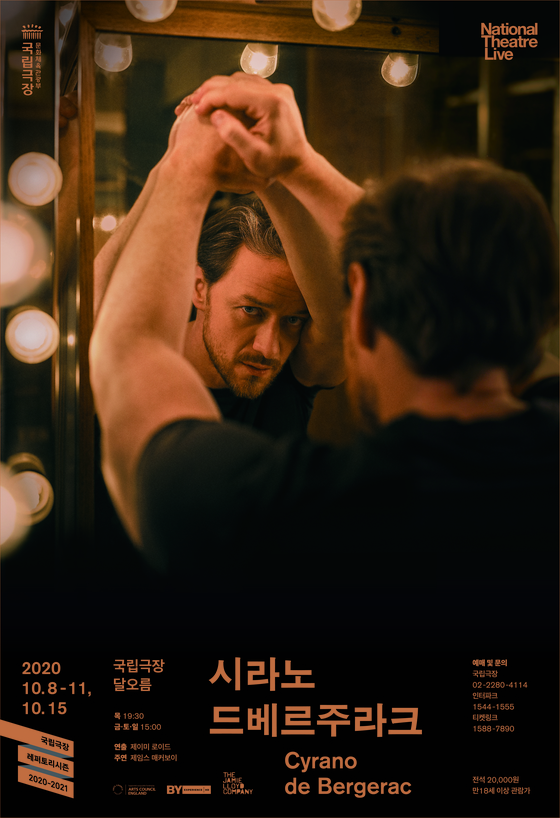 Poster of the National Theater of Korea's NT Live of "Cyrano de Bergerac," which will begin its broadcasting on Oct. 8.


Thanks to the close-ups, you can also vividly see the tender glance Cyrano gives Roxane when he reads out the love letters that he wrote on behalf of Christian — the handsome man whom Roxane falls in love with. You can also witness his eyes tearing up as he watches Roxane kissing Christian after being moved by the sincere confession of love written by Cyrano himself.

It’s not just McAvoy who presents great acting. All the cast raps, or speaks the lines, as if they are real musicians. The delivery of all their lines are so clear that you become lost for words, by the words. Especially for a person who writes for a living, you just want to get your hands on that screenplay so you can dwell on every incredibly written sentence.

The play will be screened at the Daloreum Theater of the National Theater of Korea in central Seoul from Oct. 8 to 11 and on Oct. 15, starting from 7:30 p.m. on Thursday, and at 3 p.m. on Friday, Saturday and Sunday. To follow the government’s social distancing regulation, there will be an empty seat between each audience member. The play is in English with Korean subtitles. Tickets cost 20,000 won ($17). For more information, visit ntok.go.kr.