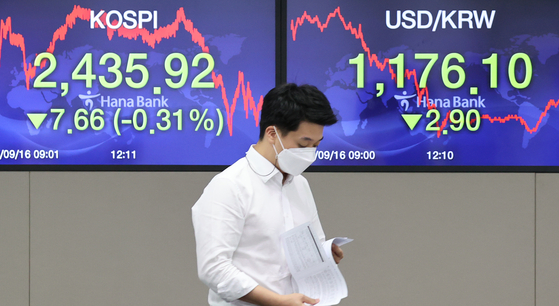 A screen shows the closing stats for the Kospi in a trading room at Hana Bank in Jung District, central Seoul, Wednesday. [YONHAP]


Stocks ended a four-session winning streak on Wednesday as investors reaped profits from the recent stock rally. The won rose against the dollar.

Trading volume was moderate at about 755 million shares worth some 11.6 trillion won ($9.9 billion), with losers outnumbering gainers 543 to 308.

Investors attempted to cash in recent gains after the index shot up to the highest since June 2018 the previous day.

Expectations about positive comments from the U.S. Federal Open Market Committee (FOMC), with its meeting set to conclude Thursday, limited a further fall.

In its last meeting, the FOMC revealed a shift of mid- and long-term policy in its inflation target.

The market consensus is that the FOMC is likely to unveil more detailed easing plans, such as stronger forward guidance and asset-buying plans, to buoy the pandemic-hit market.

The local currency closed at 1,176.1 won against the dollar, down 2.9 won from the previous session's close.