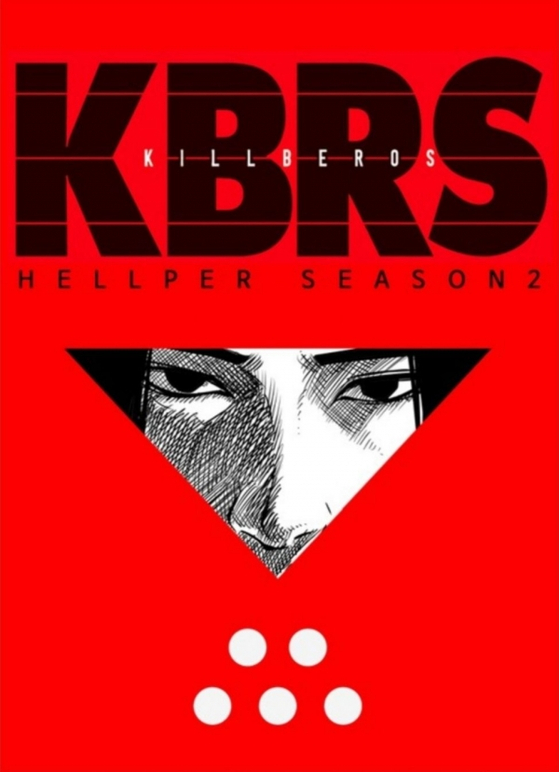 The poster of the Naver webtoon ’Hellper“ by Sakk. [SCREEN CAPTURE]

The author of "Hellper 2," one of the most popular webtoons on the nation’s biggest portal and webtoon platform Naver, has suspended publishing the dark action fantasy after being criticized for portraying a series of misogynistic and sexually violent content, including rape, prostitution, illegal spycam filming and drug abuse.

The controversial scenes include the rape of a middle school girl whose face viewers allege resembles the popular singer IU, and the torture of an elderly woman by stripping her and injecting her with drugs. The middle school girl character Lee Ji-geum does not only resemble singer IU but also shares the same name as IU's Instagram ID.

Instead of releasing a new episode for this week, author Sakk posted a letter explaining the controversy over his work along with an announcement that he will take a break from the series.

One of the controversial scenes from the webtoon ’Hellper“ where a character of a middle school girl that strongly resembles a celebrity appears on the verge of being raped. [TWITTER CAPTURE]

The author explained that portraying the controversial scenes including sexual abuse and torture was a means “to show the true self of the villains” whom were to be punished in the end. “Those scenes were to illustrate the ultimate message that good triumphs over evil,” he wrote. Injecting the older woman with drugs was also inevitable to explain a change in her personality in season 2 from season 1 and to illustrate how inhumane the villains can be, he said. “I felt bad for the character while drawing that scene, but it was the scene that I put my maximum effort into. I think that’s why the scene came out more sensationally than my usual work," Sakk said, adding that he will adjust the controversial scenes.

"Hellper," which has been published by Naver's Webtoon as part of a series since October 2011, has continued with a season 2 rated R from January 2016, releasing new episodes every Wednesday.

Since the start of the new season, issues had been consistently raised among fans regarding the sexual objectification of women in the webtoon. But the recent episode 247 released on Sept. 8, which includes the scene of the elderly woman being tortured, was the trigger that raised the issue to the public by the readers themselves. On the webtoon’s fan community on the internet community platform DC Inside, readers posted strong complaints about the episode. In particular, one reader on Sept. 10 posted a summary of problematic contents in the webtoon, referring to 23 different episodes from “Hellper 2.”

"It is definitely a problem to see such sexist webtoons being published on such a big platform as Naver without any regulations, although it is rated R. We [fans] raise the issue, as even we are tired of the misogynistic and vulgar expressions in 'Hellper,'” a reader wrote on the community.

Soon the “#stop_misogyny_in_webtoons” (translated) movement spread on Twitter, which shed light on the issues to a wider audience and led the author to apologize and suspend the series. 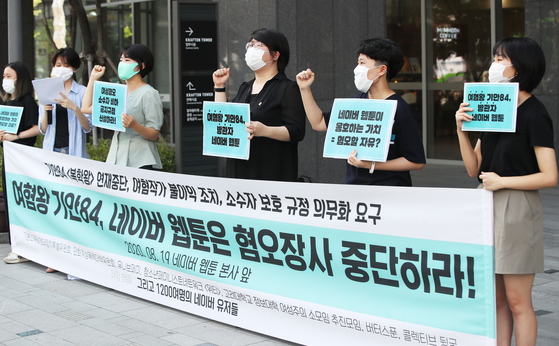 The members of eight different committees including the Special Committee on Gender Politics of the Basic Income Party and the Cartoon Sexual Violence Countermeasure Committee hold a press conference demanding the suspension of the series of Gian84’s popular Naver Webtoon "Bokhak Wang“ in front of Naver Webtoon headquarters in Seongnam, Gyeonggi, on Aug. 19 [YONHAP]

The “Hellper” controversy comes just a month after Gian84’s popular Naver webtoon "Bokhak Wang" was also embroiled in controversy over misogyny and degrading the disabled. When concerns arose that the webtoon disparages women, Gian84 made adjustments to the problematic scene, but demands continued for his withdrawal from MBC’s reality TV show “I Live Alone” and a suspension of the “Bokhak Wang” series.

As similar controversies arise related to popular webtoon series, readers say that practical measures are needed to regulate their content. Unlike broadcast content, there is no legal body that regulates the content of webtoons. Age ratings are also set by the authors and distributors according to the standards of the webtoon self-regulation committee, and there are no institutional and legal measures to impose sanctions on the content.

“Although Naver Webtoon officials had warned me to keep the level of violence and sexual material in check to not disturb readers, despite it being adult content, I always went a bit beyond their guidelines because of my greed as an author,” Hellper author Sakk wrote.

Naver Webtoon also added an apology at the end of the writer's letter, saying that they will monitor the expressions of sensitive content more carefully.

“As social sensitivity to misogyny increases, we will supplement the guidelines more thoroughly,” Naver Webtoon said.