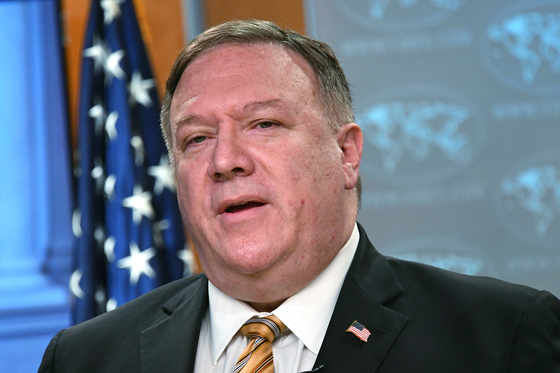 U.S. Secretary of State Mike Pompeo speaks during a press conference in June at the State Department in Washington. [AP]


Talks remain underway between North Korea and the United States that could beget opportunity in the future, U.S. Secretary of State Mike Pompeo hinted Tuesday.

The remark emerged during an online seminar hosted by the Atlantic Council, in which Pompeo admitted denuclearization negotiations with the regime failed to produce concrete results, despite three high-profile meetings between U.S. President Donald Trump and North Korean leader Kim Jong-un.


"We did have hopes that we could make further progress, that Chairman Kim would go in a different direction, but I'm still optimistic," Pompeo said.


"It's gone quiet publicly, but there's still lots of work going on between ourselves and our allies in the region — the Japanese, the South Koreans — and even efforts with the North Koreans to come to understand where there may be opportunity as time goes on."

Whether this meant dialogue with Pyongyang remains active is unclear, but speculation has been building for months as to whether the White House may attempt a last-ditch meeting with the North ahead of Trump’s reelection bid in November.

The term "October surprise," used in American politics to refer to deliberately engineered high-profile events meant to sway an election, was used by Trump’s former National Security Adviser John Bolton in July shortly after his inflammatory memoir about the administration grabbed headlines.

The possibility, however, has been denied by North Korea itself, which said in a statement it had no intention to be used as a pawn in U.S. domestic political intrigue.

That belief may be further reinforced by new exposés contained in Washington Post journalist Bob Woodward’s new book “Rage,” which details the process and rationale behind Trump’s decision to break precedence and engage in personal talks with Kim over the last two years.

Trump, Woodward suggests, was much more concerned with the optics of his meetings with Kim and the halt to intercontinental ballistic missile (ICBM) tests from the regime they produced rather than the sustainability of the engagements.

There is also little indication that the two sides have narrowed their positions in terms of a denuclearization approach — differences which ultimately consigned Trump and Kim’s second and most critical summit at Hanoi, Vietnam, to failure in February last year.

Meanwhile Pyongyang, as it combats one of the gravest economic crises in recent memory with Covid-19, has been cozying up to its traditional ally in China.

“Kim Jong-un expressed his will to do his best to develop, together with the general secretary, the [North Korea]-China friendship, valuable wealth and strategic choice of the two parties and the peoples of the two countries, into a fresh high stage in the joint struggle for defending and glorifying socialism,” read an English-language report from the official Korean Central News Agency (KCNA).

The flattery, while ceremonial, reflects the North’s growing dependence on foreign aid from Beijing and a vast network of Chinese businesses that is keeping its frail economy afloat amid the pandemic.

A report from a British think tank, the Royal United Services Institute, this month showed that around 150 Chinese businesses were facilitating the regime’s money-laundering operations and access to goods blocked by United Nations sanctions.