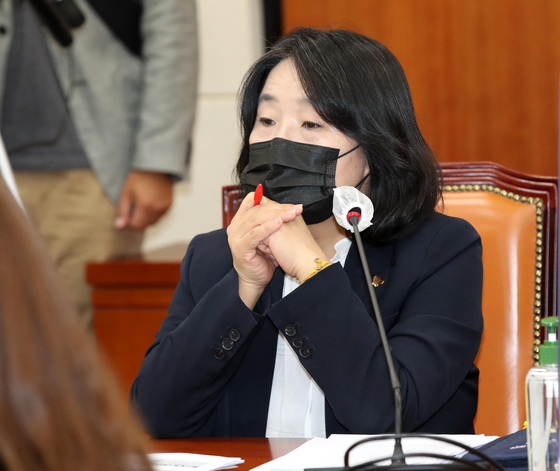 Rep. Yoon Mee-hyang of the Democratic Party (DP) attends a meeting of the National Assembly's Environment and Labor Committee on Tuesday. [YONHAP]


Rep. Yoon Mee-hyang of the ruling party, a renowned activist for survivors of Japan's wartime sexual slavery, responded to prosecutors' charges that she exploited one of the survivors by posting several video clips of the woman to her Facebook account Monday night.

Yoon, the former head of the Korean Council for Justice and Remembrance for the Issues of Military Sexual Slavery by Japan, attempted to challenge the prosecution’s allegation that she took advantage of a survivor by highlighting the woman's speech during an earlier rally.

The Seoul Western District Prosecutors’ Office on Monday indicted the Democratic Party (DP) lawmaker on eight charges including fraud, embezzlement and breach of trust. She has been the subject of intense scrutiny since May, after Lee Yong-soo, a survivor and longtime activist for the victims, accused Yoon of exploiting her and other survivors for decades.

Among Monday's charges was a count of quasi-fraud against Gil Won-ok, a 92-year-old survivor. The prosecution said Gil suffers from dementia and that Yoon had exploited her physical and mental weakness and pressed her to donate a total of 79.2 million won ($67,102) to the Korean Council between November 2017 and January this year. 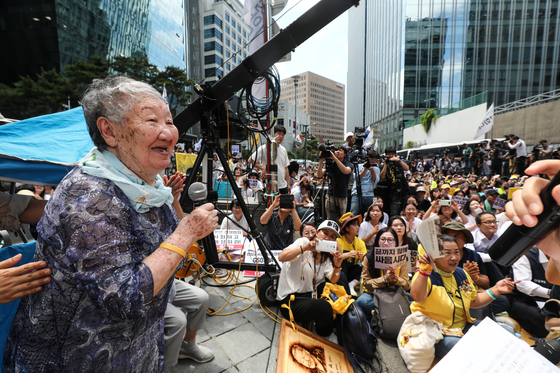 
In an apparent attempt to refute the prosecution’s argument that Gil has dementia, Yoon on Monday night posted three videos of Gil giving speeches during rallies.

“Why am I suddenly sharing videos of Gil from 2017 to 2020? Because I want to remember her life with my friends as the prosecution denied her confident, great life as an activist for peace and human rights,” she wrote in a Facebook post.

Early Tuesday morning, however, she had deleted two of the three videos without any explanation.

After the prosecution indicted her on Monday, Yoon issued a statement maintaining her innocence in all charges. She accused the prosecutors of insulting Gil by treating her as a victim with mental and physical weakness. Yoon said Gil willingly donated the money to her civic group.

According to the prosecution, the Korean Council initiated a public donation campaign to pay money to survivors who refused to receive compensation from Japan under a controversial settlement agreement between Seoul and Tokyo. Gil received 100 million won of the donated money in November 2017 and donated 50 million won of it to the Korean Council.

Gil subsequently donated another 29.2 million won to the Korean Council through this January. The prosecution said Sohn Young-mi, a Korean Council official who committed suicide on June 6, also conspired in deceiving Gil to make donations.

Since 2012, Gil has lived in a shelter operated by the Korean Council. Sohn was the caretaker of the facility. Gil left the shelter on June 11 to live with her family after Sohn’s death.

“Yoon initiated a fundraising campaign and paid the money to an elderly survivor. Yoon, then, made her donate the money to the Korean Council,” the wife of Gil’s adopted son told the JoongAng Ilbo on Tuesday. “It is a strange donation.”

According to her, Gil has been taking medicine for dementia since 2015. The prosecution said it concluded that her cognitive and judgmental abilities were impaired for a long time based on medical records and the opinions of medical professionals.

The daughter-in-law also said Gil’s condition has deteriorated to the extent that she doesn’t even remember who Yoon is.

“I guess it is fortunate that she does not remember her,” the daughter-in-law said, adding that the family is grateful that the prosecution has investigated the case.

Meanwhile, the Korean Council issued a statement on Tuesday and criticized the prosecution. When prosecutors indicted Yoon on Monday, they also indicted an unnamed senior official of the civic group as Yoon’s co-conspirator.

The civic group accused the prosecution of attempting to tarnish the survivors and their activities.

“We express strong regret that the prosecution treated a lofty act by a survivor as the act of an old lady with dementia,” it said.

While the Korean Council defended Yoon, the DP leadership has remained silent about Yoon’s indictment. Following the indictment, Yoon said she will step down from all party posts and will not exercise her right to participate in DP affairs.