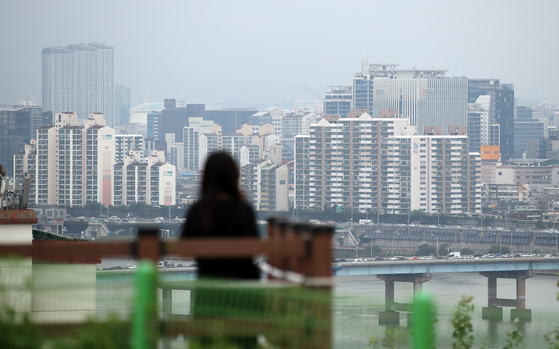 A woman looks at apartments in an area south of the Han River on Wednesday. [YONHAP]

The price gap between apartments on either side of the Han River remains as wide as ever.

In 14 districts north of the Han River, referred to as Gangbuk, a pyeong cost on average 30.89 million won last year.

The number of apartment complexes in Seoul where units cost more than 100 million won per pyeong was 52 on Sept. 14. Of those, 50 are in three districts south of the river — Gangnam District, Seocho District and Songpa District.

The remaining two are Trimaje in Seongdong District, western Seoul, and Hannam The Hill in Yongsan District, central Seoul. 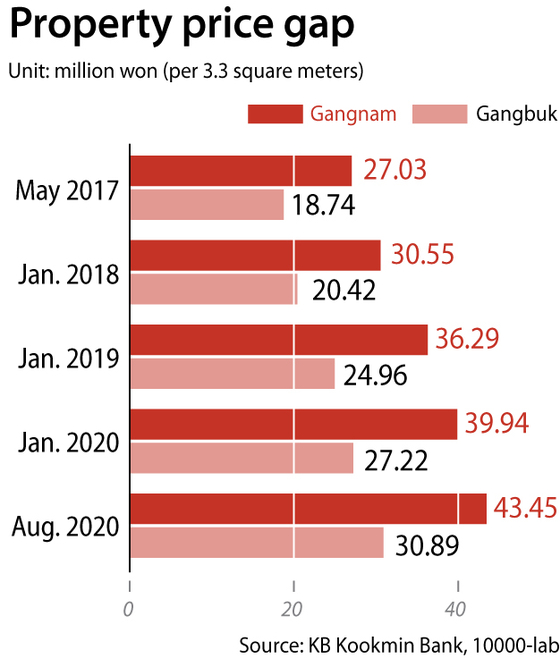 According to a report by the Hana Institute of Finance, the house price index jumped by 45.5 percent between May 2017 and May 2020.

In 2013, 41 percent of all house transactions were made by people who don't already own an apartment. That was 31 percent in the first half of 2020.

“While multiple homeowners were able to buy additional apartments, people who don’t own any houses were not able to purchase any,” the Hana Institute of Finance report said.

The government is currently reviewing a plan to use development profits in Gangnam to develop Gangbuk, but it's not clear if that would work.

“As Gangnam has better transportation, education and living environment, high demand inevitably increases the housing prices in Gangnam,” Heo Yun-kyung, a research fellow at the Construction Economy Research Institute of Korea, said. “The plan might be helpful improving living environment of Gangbuk, but the Gangnam-Gangbuk gap will still widen.”

Lee Chang-moo, a professor of urban planning and engineering at Hanyang University, agrees.

“Based on transportation data, a lot of commuters not only from Seoul but also from Gyeonggi go to Gangnam,” Lee added. “Jobs are concentrated in Gangnam, which is the major factor in determining housing prices.”