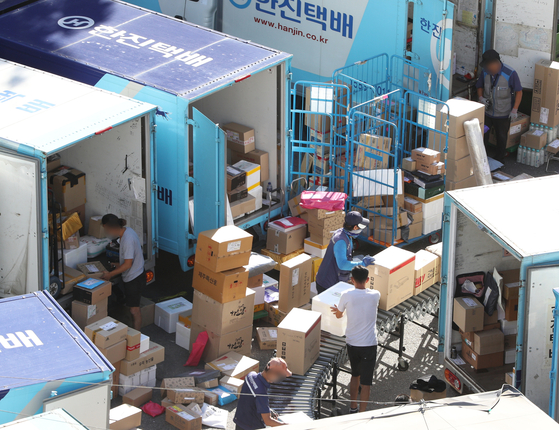 The group threatening the strike said in a statement Friday that it was positive on moves to hire more workers and the government's promise to monitor progress.

Members of the Korean Confederation of Trade Union held a press conference Thursday saying that some 4,000 delivery workers will refuse to sort parcels on Sept. 21. The union members claimed they are not being fully compensated for work being done.

Delivery workers usually sort packages by destination at logistics terminals, which takes half the work day. Union members and nonmembers voted to walk out claiming that deaths from overwork have occurred.

In response, the Transport Ministry and the Labor Ministry held an emergency meeting with delivery workers on the day of the announcement and urged the hiring of 10,000 people for sorting tasks ahead of the Chuseok holidays.

“We demand logistics companies put their utmost effort to add more workers to sort parcels. The government should also thoroughly conduct daily inspections and on-site guidance so that the entire industry can lower the burden on delivery workers,” the statement read.

It said it might still go on strike if the government’s promises are not kept. Working hours will be adjusted to start at 9 a.m. once additional workers are hired.

The number of deliveries has increased due to social distancing and a preference for contactless services. Total packages delivered increased 20 percent on year from January to August, according to a report submitted to a democratic party lawmaker by the Ministry of Land and Transport.

The number of packages delivered in June hit 293.4 million, which is up 36.3 percent compared to the same period last year.