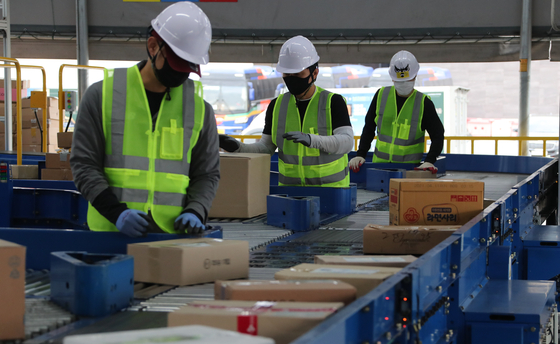 A distribution center in Seoul filled with packages on Wednedsay. [NEWS1]


Hanjin Transportation apologized for the recent death of a delivery worker.

The logistics company on Tuesday said that it feels deeply responsible for the sudden death of the delivery worker and that it offered condolences to his family.

The apology arrived amid concern about the overwork of delivery workers and deaths that may be related to stress, including a suicide of a Logen Logistics delivery worker in Busan on Tuesday, who said he “feels victimized” and complained of the low earnings compared to the efforts he made to become a delivery worker. He was in his 40s and worked in Busan.

The company promised to improve the working conditions and environment.

“[We will] do our best to make sure such an unfortunate event doesn’t ever get repeated,” Hanjin Transportation wrote in a statement Tuesday afternoon.

It said it “will quickly come up with a fundamental reform measure to prevent the overwork of delivery workers, and actively cooperate on the investigation on the death of the delivery worker.”

The company added, “Once again, [we] apologize to the family of the deceased and the public.”

The 36-year-old delivery worker who was found dead on Oct. 12 delivered around 400 packages per day. Before his death, he sent a text to a fellow delivery worker saying he felt extremely burdened.

The company previously argued that the delivery worker died of a chronic disease.