Leaders of the delivery worker union announce Friday a decision to stage a partial strike. [NEWS1]


Unionized delivery workers decided to go on a partial, nationwide strike in protest of a ban on ground-floor parking at an apartment complex in eastern Seoul, their union said Friday.

The union members, however, agreed that the walkout won’t start as originally scheduled on Tuesday, leaving their leader Jin Gyeong-ho to make a decision on the date.

According to the union, affiliated with the umbrella Korean Confederation of Trade Unions, about 5,300 members voted on Thursday and 77 percent approved a partial walkout. The union said about 2,000 workers will participate in the move.

The walkout decision was triggered by the delivery workers’ conflict with residents of an apartment complex in Gangdong District, eastern Seoul. Residents of the apartment complex, comprising nearly 5,000 units, banned trucks from entering on the ground floor from April 1, forcing them to use underground parking spaces to make deliveries. The residents said the measure was to ensure pedestrian safety inside the complex.

Because freight trucks are often too big to enter underground garages, delivery workers started leaving boxes outside the main gate of the apartment complex. 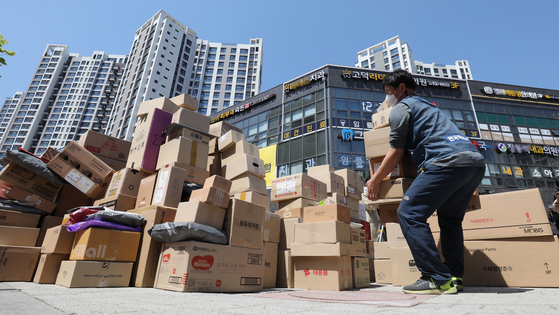 In this file photo, boxes are piled up outside an apartment complex in Godeok-dong in Gangdong District, eastern Seoul, on April 11, after its residents banned freight trucks from entering the ground floor of the compound. Delivery workers left the boxes at the main gate in protest. [NEWS1]


Residents, however, demanded that the workers make deliveries to their doors by using handcarts or change their vehicles to smaller trucks.

Workers, however, refused to do so, stressing that it is more physically burdensome when packages are loaded and unloaded from smaller, lower trucks or when they use handcarts. They said using lower trucks poses a serious health risk to delivery workers.

According to union chief Jin, workers will refuse to deliver about 10 percent of deliveries while on strike, particularly fresh food.

Logistics companies said the partial strike will not seriously hinder delivery schedules, as only a fraction of delivery workers are members of the union.