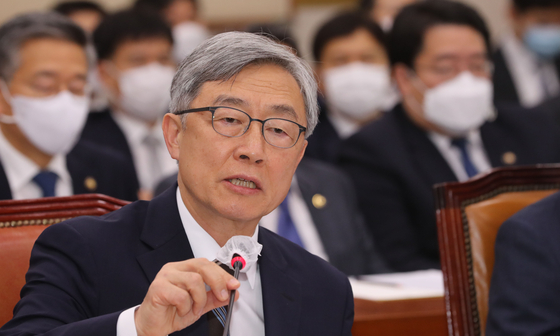 Choe Jae-hyeong, chairman of the Board of Audit and Inspection. [YONHAP]

According to the BAI’s latest audit of the Blue House, the Presidential Committee on Balanced National Development paid 4 million won ($3,400) in monthly salary to Song Jae-ho from January 2019 to last January. Song was head of the committee during the period, and he received 52 million won in total.

The BAI concluded the payments violated the law governing the committee, which prohibited any routine payment of a fixed consulting fee to the chairman.

After Song stepped down, Ghim Sa-Youl, a professor from Kyungpook National University, was named his successor. Ghim took office last March and the committee did not pay him any consulting fees.

Song is a close associate of Moon. He headed an advisory group for Moon’s presidential campaign in 2017. After stepping down from it, he was chosen by the ruling Democratic Party (DP) to run for National Assembly from Jeju A District in last April's general elections and won.

According to the BAI report, the Presidential Committee on Job Creation, chaired by Moon, paid a monthly salary to Lee Yong-seop, who served as vice chairman from June 2017 through February 2018, of 6.28 million won.

According to the law governing the committee, a vice chairman is eligible to receive a reward for assisting a national project such as collecting data or conducting a site survey. But being given the same amount of money every month as if it is a salary is prohibited. According to the BAI, the committee got around the rules and used the payments as a de facto salary.

The committee has not paid its current Vice Chairman Kim Yong-ki, a professor from Ajou University who assumed the post in February.

The BAI said the Economic, Social and Labor Council also paid a de facto monthly salary to its head since 2010.

Moon was the leader of the now-dismantled Democratic Labor Party.

The audit report was announced amid escalated tensions between BAI Chairman Choe Jae-hyeong and the administration.


According to sources, the BAI has conducted audits only on the Blue House's accounting records since 2003 till 2018. It rarely looked into general operations of the Blue House until the latest audit. When a problem was discovered, it was often hushed up, a former presidential aide said.

In recent months, the BAI went further and conducted audits on four presidential committees for the first time since Moon took office.

The BAI’s report also said the Blue House had violated the law governing contracts involving the government when it created a video clip to celebrate Children’s Day in May. The BAI said the Blue House paid a subcontractor 50 million won without following proper legal procedures.

A contract was signed afterwards, not in advance, the report said — a violation of the law. A warning was issued to the Blue House.

Speculation is growing that the unprecedented scrutiny of the presidential office was Choe’s counterattack against administration pressure on him to step down. Ever since Choe urged BAI members to conduct a politically impartial audit of the government’s decision to shut down the Wolsong I nuclear reactor, the ruling party has been pressuring him to step down.

Despite the country’s heavy reliance on nuclear energy, Moon favors a nuclear phaseout policy. The Wolsong I reactor was scheduled to shut down in November 2012, but the administration of Moon’s predecessor, Park Geun-hye, made a decision in 2015 to spend 700 million won to expand its lifespan through November 2022.

The Korea Hydro and Nuclear Power Corporation, however, abruptly reversed the plan in June 2018. The National Assembly asked the BAI in September 2019 to investigate the legitimacy of the decision.

According to the National Assembly Act, the BAI was supposed to submit its report to the legislature by February, but the audit was postponed twice. Shortly before the general elections in April, the auditors approved a postponement.

Choe replaced the director in charge of the audit and urged the auditors to conduct an impartial investigation. DP politicians started a campaign to pressure Choe to step down, speculating that the outcome was destined to be unfavorable to the administration. During National Assembly hearings in July, they said Choe has an intention to damage Moon’s policy and he must resign.

The DP also attacked Choe for rejecting the Blue House’s request to appoint former Vice Minister of Justice Kim O-su as an audit board member. The post has been vacant for months, and Choe said he is doing his best to find a neutral candidate.

The BAI officials said its latest audit of the Blue House has no political intent. “We just announced the problems we’ve discovered because they were there,” a BAI official told the JoongAng Ilbo.

The Blue House said it had no response to the report.

Board of Audit and Inspection Choe Jae-hyeong Blue House BAI