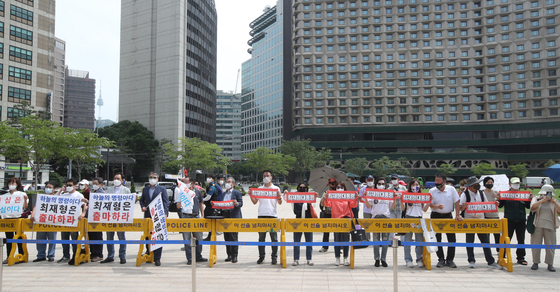 Supporters of Choe Jae-hyeong, former head of the Board of Audit and Inspection, urge him to run as president in a press conference in front of Seoul Plaza in central Seoul Monday afternoon. [WOO SANG-JO]


Some 200 people gathered at a rally calling for Choe Jae-hyeong, former head of the Board of Audit and Inspection, to run for president in front of the Seoul City Hall Monday afternoon.

Choe stepped down as chairman of the BAI last week amid speculation that he will run as an presidential candidate. He is considered a strong rival among conservative voters to former Prosecutor General Yoon Seok-youl.

The group of Choe’s supporters calling themselves “People Who Embrace the Star” is co-chaired by Cho Dae-hwan, a former senior presidential secretary for civil affairs, Park Jun-hee, a former head of the Songpa District Office, and blind singer O Ha Ra. The group held a press conference at Seoul Plaza to rally support for Choe’s presidential run, their first official event. The presidential elections are slated for next March.

Cho said that former chief state auditor Choe lived with “harmony, consideration, sacrifice and service,” adding, “I believe that he can save the country and the people from division and conflict for the future our next generation.”

The two were classmates at the Judicial Research and Training Institute. Cho said he has been urging Choe to run for president but has not communicated with him much recently.

Park, also a lawyer, called Choe a “really good person” who used to carry his disabled friend’s backpack during their days at the Judicial Research and Training Institute.

He pointed out that Choe received 93.9 percent support across party lines at his hearing to become BAI chairman and called on him to announce a candidacy soon, saying the “times are calling for him.”

His supporters held up signs saying Choe is the "real star to save the country." They included students of Choe’s alma mater, Kyunggi High School in central Seoul. Choe earned a law degree from Seoul National University and previously served as head of the Judicial Research and Training Institute.

Choe told reporters that he was aware of the press conference in support of him.

Choe, a former judge, was appointed by President Moon Jae-in in January 2018 to head the audit agency, known for its political independence and neutrality. He had six months left in his four-year tenure when he tendered his resignation on June 28.

Moon was quoted by the Blue House as saying that Choe “set an undesirable precedent” by stepping down, as the chief state auditor post should maintain political neutrality.

A BAI chairman has never before stepped down before his term was over to partake in politics, though former prime ministers Lee Hoi-chang and Kim Hwang-sik, who also served as BAI heads, entered politics after their prime ministerial stints.

The JoongAng Ilbo reported Sunday that Choe told the main opposition People’s Power Party (PPP) that he will spend time in the countryside with his family over the weekend to “calmly organize” his thoughts.

A source close to Choe told the newspaper, “This could be considered his last family trip before going into politics.”

The poll was conducted over July 2 and 3 on 1,002 adults nationwide.