You can rely on a bite of something sweet when stressed, especially during the pandemic, when visits to restaurants and cafes are limited. Small pastry shops all across Seoul may give you the lift you need, or at least a sugar high.

With more culinary talent entering the restaurant industry, the scene is more diverse than ever. The pastry chefs who have honed their skills at big-name restaurants plating sweets for the end of a meal are now venturing out to establish the new dessert scene in Korea. Pastry shops have tended to have many seats for customers to come in and lounge, but newer shops are focusing more on bites than drinks, and many encourage takeout orders instead of providing seating.

Breaking with the common notion that dessert shops carry whole-size cakes, they also mostly only do small gateaux, unless customers place an order a few days in advance.

Many pastry chefs have returned from studying or working overseas over the past couple years. Given that there are still many desserts that are internationally popular yet less prevalent in Korea, many of these pastry chefs who own their own shops also teach classes either at their shop or at larger facilities.

Get your spoonful of sugar and forget your worries, at least temporarily. 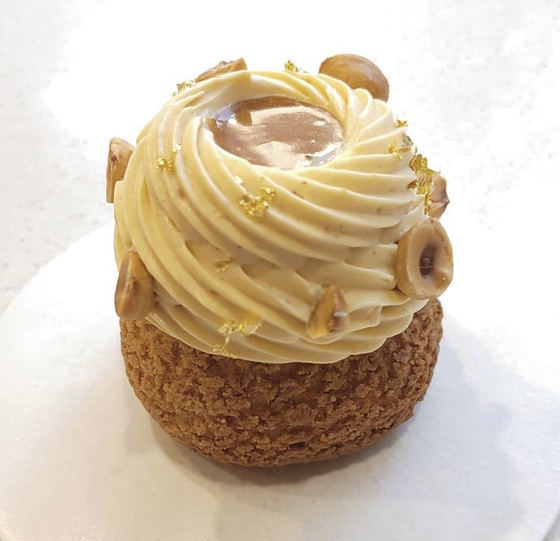 A bakery that serves French pastry. Besides a selection of madeleines, financier and cookies, it has a variety of petite cakes. On weekends, the bakery unveils specials to better introduce French desserts that might be lesser known to the general public in Korea. It's recommended for those who want to learn more about French pastry and for those who miss them from their times in France. The shop has a communal table in the center to enjoy bites of something sweet with a drink on the spot. 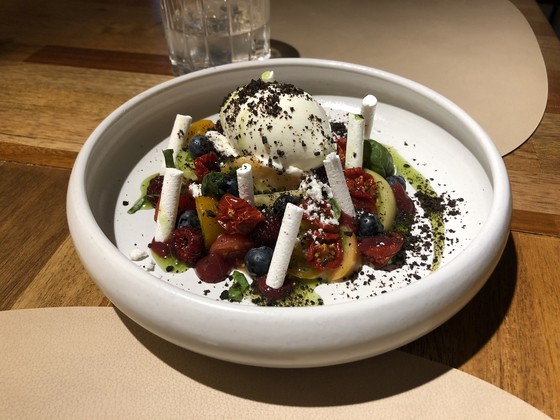 One of the unique spots in Korea that pair sweet and savory desserts and alcoholic beverages. You can order any drink that’s listed on the menu or go for the suggested pairing. Here, you can order premade desserts like cakes or macarons but also order plated desserts that are put together as you order. While the majority of the dishes are sweeter, the shop always has a couple of more savory options, such as a tomato-based dessert or one that tastes like carbonara. While it doesn’t have any showcase for whole cakes, the patisserie does take orders in advance. 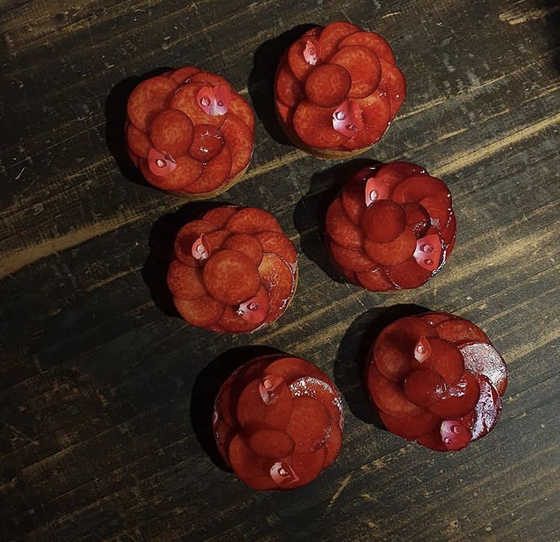 Probably one of the best-known dessert spots in western Seoul, where there is almost always a line of people out the door — as much as 30 minutes ahead of its 12:30 p.m. opening. Desserts sell out fast, so make sure to check either its Instagram or call before a visit. The shop uses seasonal items, like figs, to provide a range of flavors throughout the year. The pastry chef is continually searching for fruits and other ingredients that may have not been used much in dessert, such as odi (mulberry), in order to make visits to the shop worthwhile.


Le Soleil
While other pastry shops do a little bit of many different types of desserts for diversity, this shop delves deep into simple baked goods like madeleines, financiers and some canelés. While many pastry shops only serve fruit-driven, or chocolate-covered desserts to accentuate the sweet side, this shop also branches out into more savory ingredients. One of its popular items is named Sun-dried, with sun-dried tomatoes, Gruyère cheese, cilantro and extra-virgin olive oil. It also uses many different grains including perilla seeds and sorghum. 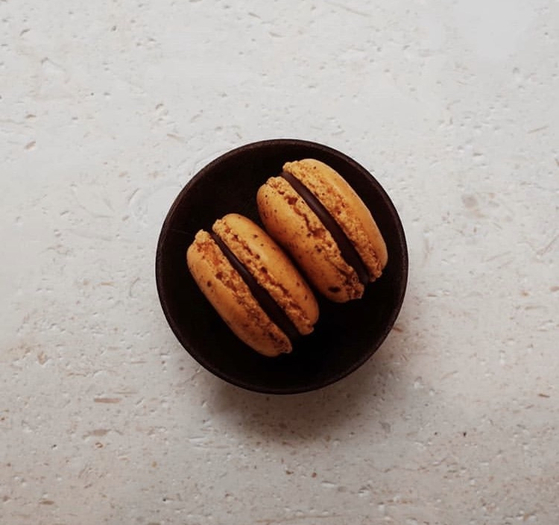 What used to be called My Funny Dessert changed its name and location to focus on French pastries about a year ago. It carries macarons and a variety of small cakes, as well as drinks. Expect a line, especially during the lunch hour. Everything sells out fast, even only an hour after its opening on weekends. If you go in the late afternoon, chances are you would only have a couple of macarons to choose from. Its macarons are more on the chewy side. Since there is very limited seating, it might be better for a group of more than four people to find a nearby park to enjoy their desserts if they aren't taking them back home to eat. 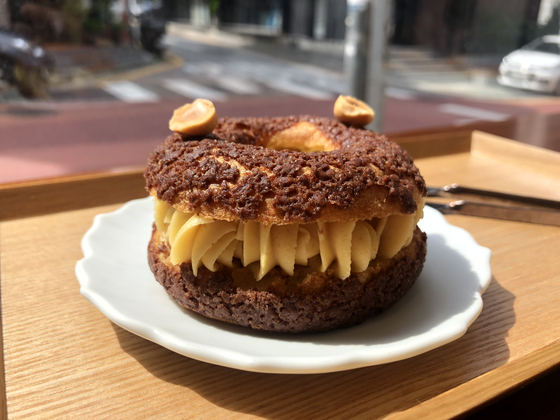 Steps away from Seoul Arts Center in Seocho District is a pastry shop that focuses on more chocolate and nut flavors than items with citrus flavors. Different from many other dessert shops, that close before dinner time, it stays open until 8 p.m. to cater for those who want something sweet after an early dinner. It has bar seats by the window for those who want to enjoy the sun while eating dessert during the day. 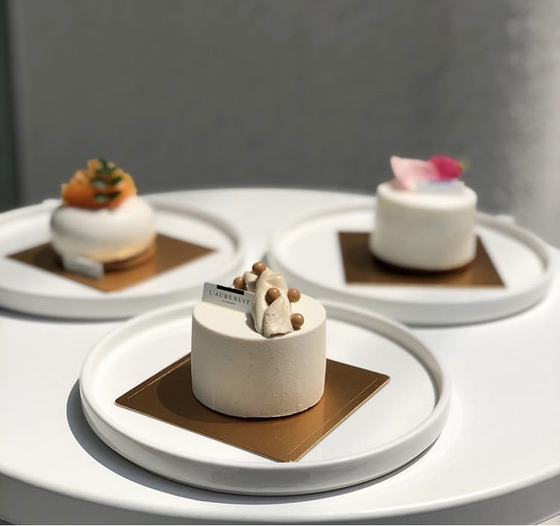 While many dessert shops are not close to any subway station, this shop is within walking distance of Seolleung Station, line No. 2 and Bundang line. Different from many other shops that have very limited seating, this pastry shop has a large space with tables and chairs to accommodate a large group of people. Besides its small cakes, it carries round, palm-sized pound cakes. Customers can choose six to seven pound cakes to box up as a gift. The shop also makes a full-sized cake on request for orders made around five days in advance.


Jungsik Café
A casual outlet of Michelin-starred fine dining restaurant Jungsik offers not only all-day dining but also a variety of sweet and savory foods. One of its signature cakes is made with corn, with seasonal decorations and different flowers, and it has been chosen by many who want to give a cake to their parents, as the version here isn’t too heavy with cream, and is light enough to be enjoyed after a full meal. Fans of carrot cake should try the carrot oatmeal cookies. The cookies with filling are easily packable to be enjoyed without a fork and a plate, yet its taste would remind you of a piece of carrot cake. Other classics, including crème brûlée and egg tarts, are also available along with madeleines. Although the season has already passed for this year, the cafe unveils its own version of bingsu, or shaved ice, each year. This year’s took the motif from the scene in Jeju with Dol Hareubang, large statues made from volcanic rock, as well as a black sesame and green tea brownie. 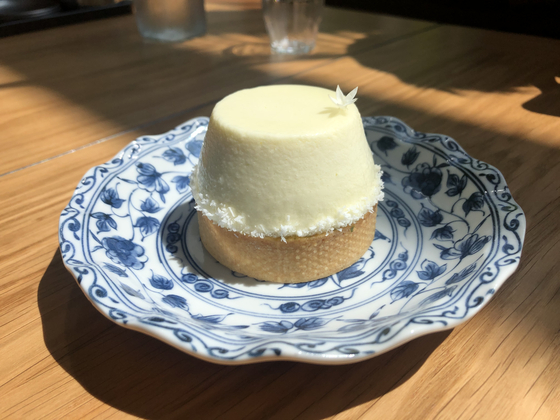 This is a sister restaurant to Jungsik Café. The Vietnamese-style cafe located inside Anteroom Seoul hotel’s first floor offers all-day dining, with pho, coffee, dessert, wine and more. It uses more exotic ingredients like cilantro to introduce bites that could cleanse your palate.


Sona
One of the few places that offers plated desserts in Seoul besides restaurants, as well as one of the longstanding ones in Seoul's culinary scene, where cafes and restaurants open and disappear often. In the heart of Garosu-gil in southern Seoul, Sona has been a magnet that attracts trendy foreign visitors coming to town. While many of the trendy pastry shops follow recipes from French or European classics, the chef here, who used to study and work in the United States, offers more eclectic flavors. 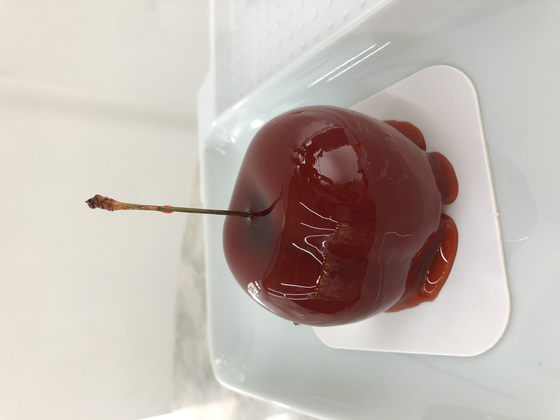 Happy Happy Cake
It often runs a special week for a certain ingredient, most recently cherries, to show how different versions of desserts can be created with just a single item that’s in season. At the moment, it is serving many different fruits as a main ingredient to top a crispy bottom crust. To make one feel like they are at the Spanish Steps in Rome while staying inside the shop, there are steps that are used as seats.


Olemus
A small bar-type dessert and tea spot. It is suitable for visiting alone, as the entire space is very quiet. The overall ambiance seems to invite those who want to take a break from the pace of city life. Of course you can go with a friend to try more types of desserts, but you are constantly aware of the fact that you need to keep your voice down so as to not hinder other guests’ time to enjoy their drink and dessert. The flavors used in the food and drinks, as well as the store’s decoration, are very Asian, compared to many other cafes and pastry shops that aspire to the tastes of Europe or the United States.

Little & Much
The highly popular Little & Much reopened last week at its original location close to Gangnam-gu Office station of line No. 7 and Bundang line. It had shut its doors last June after running the shop for five years, while leaving the window open for those who want to get pastries at locations that sell its desserts, including Hell Café. It reopened last week, only for takeout, and plans to announce more details soon.

The shop, which is currently working with Blue Bottle Korea and Shinsegae Chosun Hotel’s L’Escape Hotel to make exclusive desserts, is coming back with its own shop once again. It temporarily closed its location in Seocho District in December after running the shop for five years. But it recently announced that it is coming back again on Oct. 8 in the same spot.