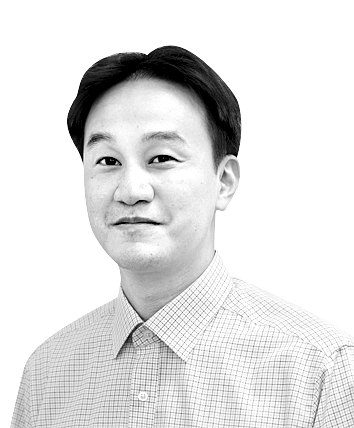 Sohn Hae-yong
The author is business news editor of the JoongAng Ilbo.

Hong Nam-ki, deputy prime minister for economic affairs and finance minister, vehemently shot down speculation last fall brewing about the bureaucrat being a candidate of the ruling Democratic Party (DP) to run in the April 15 parliamentary elections. Hong publically reiterated his denial as his priority was “reviving the economy.”

But behind the scenes, he reportedly told his confidantes that he would not be able to turn down the offer if the president personally asked him to run. The comment underscores his devotion to President Moon Jae-in. He added that if he did jump into politics, he would commit himself for three to four terms. Hong is said to be a perfectionist as he would even shovel out water if he is asked to catch fish.

The rumor died down soon after President Moon publicly asked Hong do go extra miles to steer the economy in hard times. By the end of September, he would have served 660 days to be the second longest-ever finance minister in Korea. His loyalty to the Moon administration — and diligence — are often cited as part of his winning feature.

Hong has long been regarded a “yes-man” since he took office in 2018. He replaced Kim Dong-yeon who often clashed with the government on its left-leaning policies. Hong mostly followed orders from the Blue House or the DP as Land Minister Kim Hyun-mee, a veteran legislator of the ruling party, did. She even floated the idea of raising property taxes even when tax affairs fall under the jurisdiction of the finance ministry.

In April, Hong questioned the ruling party’s proposal to dole out coronavirus relief grants to every household ahead of the April general election. He argued for selective grants to low-income families — in other words, to families in the lower 50 percent income category. Then he settled for grants to the lower 70 percent income group and then yielded to a universal handout regardless of their income. 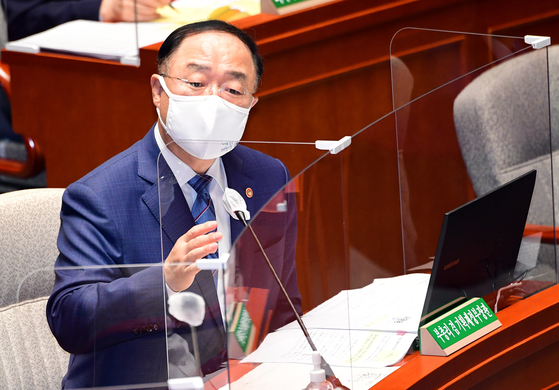 Deputy Prime Minister for Economic Affairs Hong Nam-ki, who also serves as a finance minister, answers questions from lawmakers at the Special Committee on Budget and Accounts in the National Assembly last Friday. [LIM HYUN-DONG]


His malleable trait has since become a habit. When the president first ordered the establishment of a permanent government watchdog over the real estate market, he pointed out a danger in the plan. But Hong yielded to the idea and the government is launching a similar institution later this month. At first, he opposed the idea of a second round of relief grants and the fourth supplementary budget, but eventually agreed to the plans. He also gave up the finance ministry’s longstanding defense of the 40 percent threshold in the government’s debt to GDP ratio.

Policy decision-making lies with political ministers in the Moon administration. The liberal front believes it lost its governing power after its reform plans under President Roh Moo-hyun floundered because of bureaucratic resistance. Although eager in ideological protection, the policymakers in the Blue House, who hail from political or activist backgrounds, lack capabilities. They have wreaked havoc on public finance and market with their half-baked policies. A critical lack of voices from economic bureaucrats has added to the damage.

Former Deputy Prime Minister for Economic Affairs Jin Nyum  took pride in his defense of fiscal solidity even at the threats of armed generals under military regimes. He insisted that the finance ministry officials’ primary duty was to protect tax funds against any pressure. It is why Jin still remains one of the most respected bosses by the ministry officials.