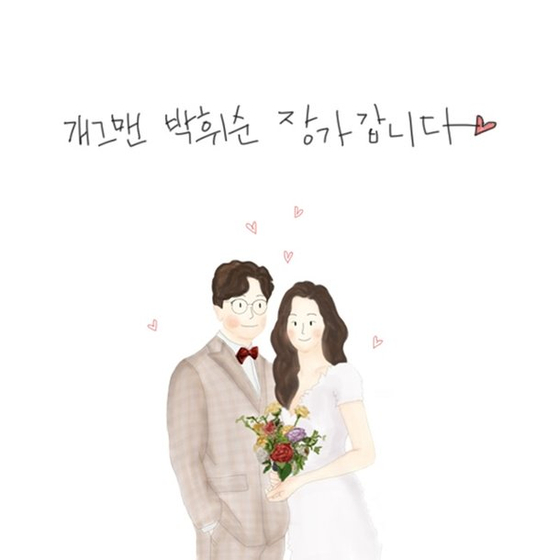 Comedian Park Hwi-soon is getting married in November after one year of dating, the bride-to-be announced on Park’s Instagram account on Tuesday.

On Tuesday morning, a new post was uploaded on Park’s Instagram that said, "Hello! I'm Hwi-soon's girlfriend,” and announced their marriage by saying, "He is getting hitched!"

"Unlike his appearance, he is very warm and caring, so I decided to marry him," she wrote.

"I hope all the brides and grooms in the country will cheer up like us. As it's a tough time, I hope we can be stronger with the person next to us and double our happiness."

She ended the post with a note that said "You may wonder if this account is hacked, but it's definitely not.”

The picture uploaded along with the letter showed an illustration of the couple dressed in a tuxedo and a wedding dress with the text, "Comedian Park Hwi-soon is getting married."

Park previously announced on JTBC's reality show "Don't be the First One!" aired on Sept. 13 that he was in a relationship.

ChoA of girl group Crayon Pop to tie the knot on Dec. 25