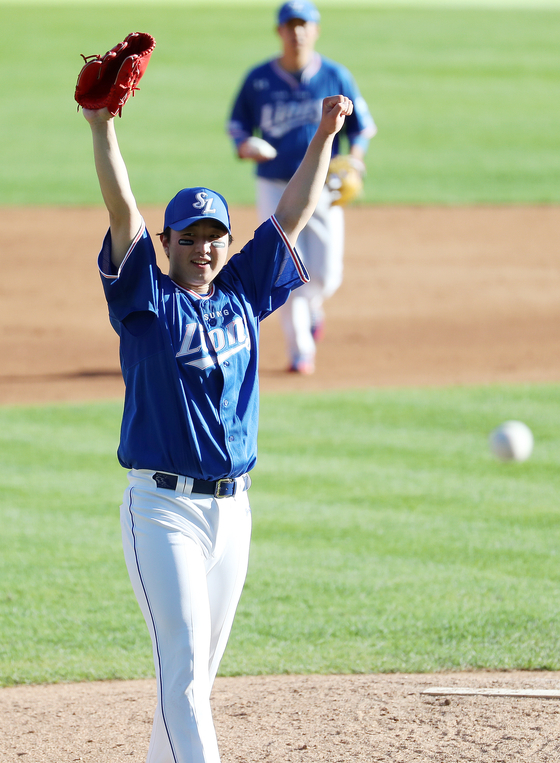 Samsung Lions pitcher Choi Chae-heung celebrates after tossing a complete shutout during a game against the LG Twins at Jamsil Baseball Stadium in southern Seoul on Sept. 13. [NEWS1]


Samsung Lions starter Choi Chae-heung may be pitching for a struggling team, but it doesn't seem to be holding him back much.

At least not all the time. Although Choi has made headlines for his strong performance this season, it hasn't all been plain sailing.

In fact, Choi may have a claim on the worst game of the season. Back on Aug. 12, during the Lions’ game against the Doosan Bears, Choi gave up 17 hits and 11 runs throughout five innings, making the worst kind of history in the process.

Giving up 17 hits in a single game ties the KBO record in terms of the most number of hits. Since Choi was having a pretty good season, his historically bad result came as a big surprise. Due to that one game, his ERA shot up from 3.42 to 4.52.

Luckily, that game seems to be an anomaly. Choi doesn't appear to have been shaken up and quickly returned to form.

Although Choi’s ERA for the season is still pretty high at 4.16 with seven wins and six losses, he still has at least one performance that's especially memorable for a good reason. During a game against the LG Twins on Sept. 13, Choi tossed a complete shutout. Throughout nine innings, he gave up four hits while striking out 10 and giving up no runs.

This was Choi’s first-ever shutout.

As he is slowly getting better with the end of the season approaching, Choi has become the starter that Lions manager Heo Sam-young can rely on. Looking at the team's starting rotation, Baek Jung-hyun has been sent down to the Futures League due to injury while Won Tae-in has started to fall apart.

But with Choi’s performance, the Lions still have some balance to their starting rotation, led by Choi and foreign pitcher David Buchanan. Having fully earned his spot in the Lions’ rotation in only his third season in the KBO, Choi has one goal, to fulfill the regulated innings for a starting pitcher this season.

Below are edited excerpts from an interview with Choi.


Q. You made quite an impact with a complete shutout against the LG Twins on Sept. 13. Did anything feel different ahead of that game?

A. For some reason, I did feel good that day, better than usual. My control of my fastball was good. That's how I got to strike out so many batters. As the weather cools down I think my pace is picking up.


Q. Before the complete game, your worst game was against the Doosan Bears on Aug. 12. What changed since then?

A. Rather than doing something differently, I told myself to continue doing what I’ve been doing. I started to think that the main role of a starter is to be consistent. Although I played badly that day, I continued pitching with the thought that “I’ll do well if I do it consistently.” As I started telling myself that, I feel like my performance is also getting better.

Q. Your performance this season has improved compared to last year. What changed?

A. I think I’ve gained more confidence compared to last season. Since spring training, my control of my pitches were all right. Since I wanted to play as a full-time starter, I’ve done a lot of weight training to build my strength and I think that worked out well.


Q. Your batting average against right-handed batters went down. What changes did you make?

A. My batting average against right-handed batters was lower [than against lefty batters] last year too.

This season, my changeup is working well. When I was pitching against left-handed batters last year, I had a hard time pitching inside, more toward their body. Due to this, I made it easier for the batters to hit, which is why my batting average against [vs. left-handed batter] was higher [at 0.316].

This season, by pitching more toward the inside of the body, I’m improving on my weakness. But by throwing more pitches like that, I'm also hitting the batters more as well.


Q. What is the biggest success behind lowering your batting average compared to last year?

A. I think being able to throw pitches toward the batter’s body with more confidence is the [biggest] reason. Since I’m being more confident [with my pitches] I can feel that my pitches have gotten a lot better than last year. For pitchers, routine is important and I’m in the process of figuring it out.


Q. After you attended Hanyang University, you switched your position from being a batter to a pitcher. What triggered you to change your mind?

A. I saw a limit in my development as a batter. I had more fun as a pitcher and I wanted to challenge myself with a new position. I requested a meeting with my manager regarding a position change and at the time, our manager accepted it by telling me that “I thought of you as a pitcher.”

Since the training for a pitcher and batter is different, the process was tough in the beginning. I was able to adjust quickly and saw good results.


Q. For the first time since you made your KBO debut with the Lions, you’re on track to fulfill the regulated innings. How do you feel about that?

A. My goal is to fulfill the regulated innings. It’ll be hard but I really want to achieve it. If I can get through the rotation without an injury, then I want to exceed the number of innings. I want to achieve this more than I want to pick up 10 wins. It can be a motivation for me to go one step further.