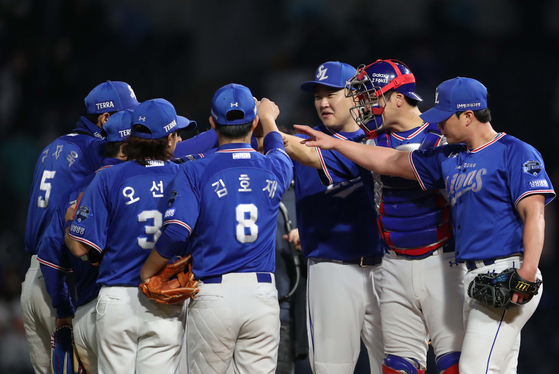 The Samsung Lions celebrate after beating the NC Dinos 11-5 at Changwon NC Park in Changwon, South Gyeongsang on Saturday. The Lions finished the 2021 KBO regular season tied for first place with the KT Wiz, and will play a tiebreaker on Sunday. [YONHAP]


The 144-game 2021 KBO regular season ended with the Samsung Lions and KT Wiz tying for first place on Saturday, forcing the pennant to a tiebreaker game on Sunday afternoon to decide which team advances directly to the Korean Series.

The Lions beat the NC Dinos 11-5 at Changwon NC Park in Changwon, South Gyeongsang on Saturday, finishing their game just minutes before the Wiz wrapped up their 8-3 victory over the SSG Landers at Munhak Baseball Stadium in Incheon.

With the wins, both teams complete the season with 76 wins, 59 losses and nine ties for a 0.563 winning percentage, leaving them both in first place. Under KBO rules, that means the two teams have to meet at Daegu Samsung Lions Park in Daegu on Sunday to play a tiebreaker to decide who takes the league title and a ticket directly to the championship.

Following that somewhat anticlimactic end to what was one of the most dramatic season finishes in recent KBO history, the league decided to revise the rules to add a nail-biter tiebreaker in the event of a tie after 144 games.

Sunday's tiebreaker will actually be the second in the league's history. In 1986, the OB Bears — now the Doosan Bears — and the Haitai Tigers — now the Kia Tigers — finished the season with the exact same number of points, triggering a tiebreaker for the league title. That tiebreaker — played as a best-of-three series — was won by the Bears with two consecutive wins.

Sunday's game between the Lions and the Wiz will not end until a team is declared victorious. If neither team pulls ahead in the regulation nine innings, they will keep playing for as long as it takes for somebody to break through. The game will be played at the home of the Lions, who lead on head-to-head record with nine wins, six losses and a tie.

While Saturday's games didn't separate the top two teams, they did determine who else will be headed to the postseason.

The LG Twins finish the regular season in third place and will advance straight to the first round of the playoffs.

The fourth-place Bears and fifth-place Kiwoom Heroes will play the Wildcard Series starting Monday. The Bears start the series with a one-game advantage, meaning the Heroes need two wins to advance, while the Bears could tie the first game and walk away victorious.

Dropping their final game to the Wiz took the sixth-place Landers out of contention, while the seventh-place Dinos, the KBO's reigning champions, fell out of the race with a loss on Thursday.